MITO apprentices get a taste of rally life

Through MITO’s partnership with Paddon Rallysport Group, four MITO apprentices were given the opportunity to join MITO Ambassador, Hayden Paddon’s crew at two events in 2022; Ashley Forest Rallysprint and WRC Rally New Zealand. Hayden wanted to showcase the lifestyle of a rally technician to young, keen apprentices in the automotive industry, and give them the opportunity to get involved in the excitement of two iconic rally events. 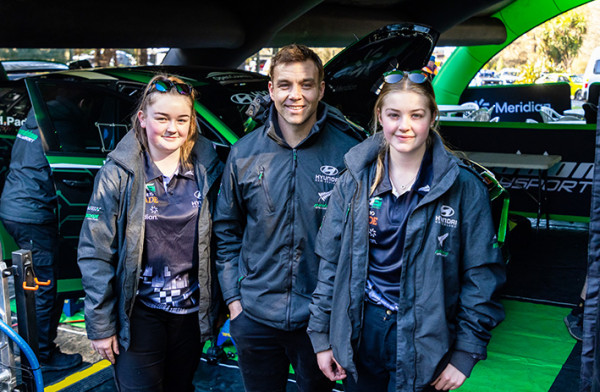 Lily and Mercedes with Hayden Paddon at Ashley Forest Rallysprint.

Lily Henderson from Transport Engineering Southland and Mercedes Mulder from Hyundai South Canterbury were selected as the successful applicants to join Hayden at Ashley Forest Rallysprint in Rangiora for what would be a successful weekend for the team.

Hayden and the team secured first place with the Hyundai Kona EV rally car which has been a huge success for the team. The Kona EV under Hayden’s control delivered an impressive 55.64 seconds sprint time narrowly beating second place with a time difference of only 0.38 seconds.

There was a lot of excitement to be had for Lily and Mercedes who were kept very busy over the weekend. 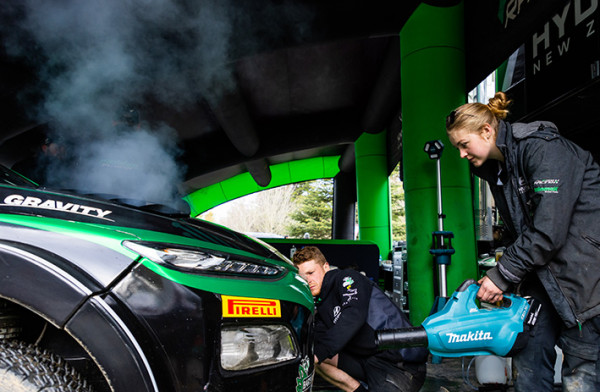 Mercedes being shown the ropes by MITO graduate Ben Fretwell.

Mercedes was thrilled to be given a range of responsibilities. “We were responsible for wheel changes, bolt checks, battery charging and cooling. Charging was tricky and we had to keep resetting the charger. It had to be an ideal temperature.”

Lily was particularly impressed by the team culture. “The team were amazing. We felt very comfortable working with them. It was such a great experience even just watching but also being included and helping work on the car.”

The two went into the event not sure what to expect and there were certainly some differences between their workshops and the rally environment. Mercedes was a star, taking on any challenge as a learning opportunity. “I was definitely out of my comfort zone. I’d never worked on anything like an EV rally car but I’m keen to give anything a go.”

Lily was struck by the speed and power of the EV. “To an extent, my work experience helped but it was cool seeing the electrical side of the car. You don’t realise how fast they go!”

To see the rally environment up close and personal, and not from behind a spectator barrier, gave them a new perspective on rally culture, and coming away with a win was a big bonus.

Mercedes was converted. “I actually got hooked on it. I’m usually quite calm and collected but I got so excited when we got there. It was amazing. I can’t find a lot of words for it. I wasn’t expecting to come away so buzzed and I got quite emotional getting the win.” 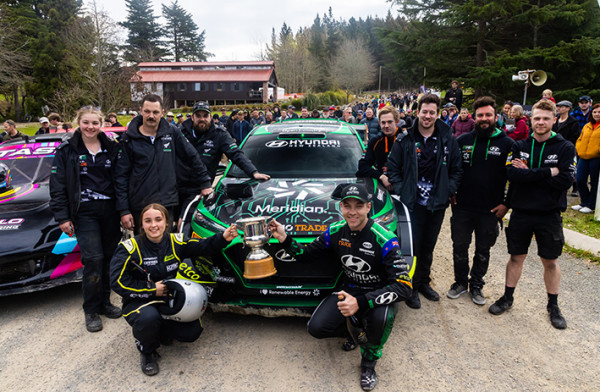 Hayden took first place at Ashley Forest to the delight of the whole team.

Lily was so proud to be a part of a winning team. “The highlight was Hayden winning. It was such an amazing feeling with it being such a close race and coming out with that win.”

Hayden was pleased to have the two on the team for the weekend. “It was a real privilege to have Mercedes and Lily part of the team with us, and we were all impressed by how involved and enthusiastic they were to help out. They really gelled as part of the team in a short space of time while we were able to give them a first-hand experience to rallying a very unique EV car.”

Only two weeks later, Hayden and his team had another success at WRC Rally NZ in Auckland, finishing first in the WRC2 division with his Hyundai I20 N Rally2 car. MITO apprentices Liam Wilson from Waipukurau Motors and Dylin Campbell from Valid Automotive Limited were the successful applicants who joined Hayden’s crew for this event. They both shared some great stories with us about the experience. 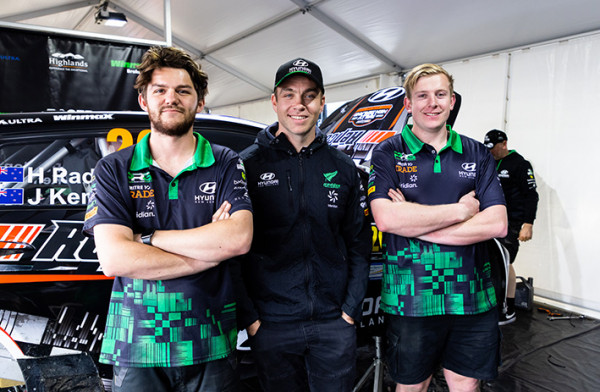 Dylin and Liam were with the Paddon team for four days over WRC Rally NZ.

“[The Paddon rally crew] are an awesome bunch of guys.” says Liam. “It was a great experience joining a world-class crew and actually being a part of something big like that. They were always helpful and gave not just simple answers but really showed you how everything works and why they do things. It felt inclusive, getting us involved, instead of just tool-running and cleaning.”

Dylin was grateful to feel included in the team. “We were kept busy prepping for service and making front splitters. Once the vehicle was in for service, we’d get a corner each and check the wheel for play, do a spanner check to make sure nothing had come loose and check the brake lines. We weren’t left out. They really got us into it.”

With the learnings from their apprenticeship paired with their work experience, Liam and Dylin had existing industry knowledge to work from, but noted that the rally environment, particularly on a race day, was quite different from the workshops they are used to. 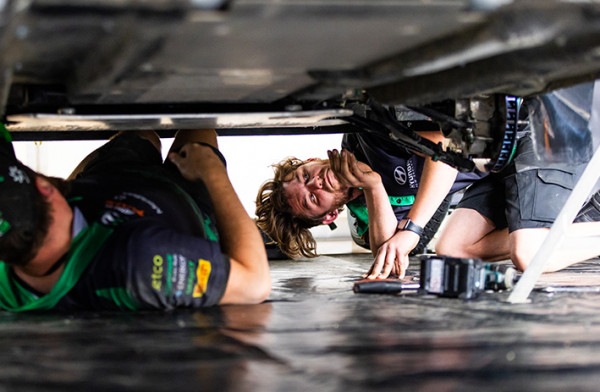 Dylin was keen to learn what it takes to make a rally technician.

Liam was impressed by the team’s mastery of their craft. “The biggest thing for me is that [the Paddon team] are always working on the same car and they’re all experts. They know exactly what they need and how to continually refine performance.”

Dylin found that the life of a rally tech was intense and exciting at key moments. “It was quite relaxed until Hayden and the car came in for service. Then it was full-on! Everyday work life is not as full on but rather steady throughout.”

The whole event was a great success for the Paddon team and the visiting apprentices came away with several highlights.

Liam was proud to be a part of it. “The big thing for me was working on the racecars. I’ve only really seen the top-level guys on TV and it’s actually so great to be underneath and in the engine bay [of a top-grade rally car]. When you see the car leave after you’ve worked on it and given it a big clean, it gives you a sense of pride. Seeing it go out knowing people around the world are watching is a really great feeling.” 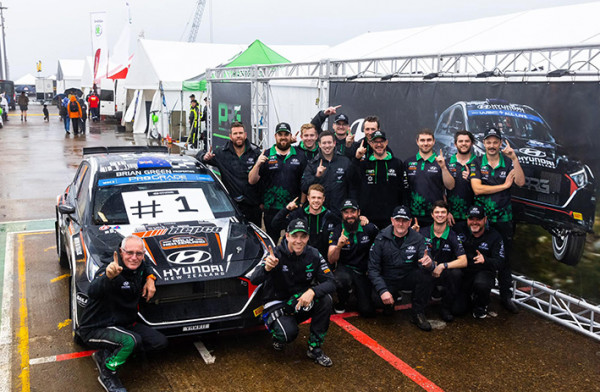 Another happy ending for the Paddon team taking first place in the WRC2 division.

Dylin agreed, “The highlight was working on the vehicles and seeing their technology. It was also a good feeling knowing that I had something to contribute towards the winning team. It was a nice finish to the event getting the win.”

The Paddon team were happy to show the two apprentices how they operated, and Hayden was pleased to share such an iconic event with two keen learners. “I think for Dylin and Liam it must have been an exciting opportunity to be part of the country’s biggest motorsport event from inside the ropes. The WRC events are a little unique in their format, in the fact that you can go from waiting around for big chunks of the day to high-intensity 90 minute intervals when the car arrives to get it sorted – and with no room for error. They both worked so well with the team, and despite the hurried situations during services, stayed calm and were an integral part of making sure the car left service on time.”

All four apprentices were grateful to MITO and Paddon Rallysport Group for the opportunity to be a part of a rally team.

“I’m forever grateful, it was an unreal experience!” says Lily.