MITO is delighted to partner with Emma Gilmour as one of our MITO Ambassadors! Emma is a very accomplished Rally Driver and public figure in New Zealand and across the globe.

2022 marked Emma being signed as the first female driver for McLaren which is a groundbreaking feat and we can't wait to see how far she takes her career with them. 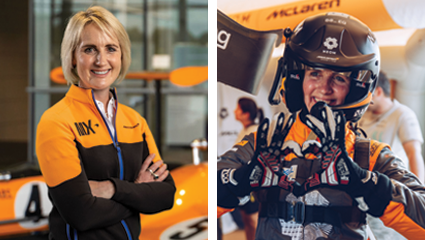 Showcasing MITO's Ambassador, Emma Gilmour! Emma is a star Rally Driver and public figure in New Zealand who hopes to raise awareness of automotive trades and encourage more women to get into the industry.

Emma joined the MITO team with the goal of increasing interest in automotive trades for young people and women in New Zealand.

"I'm really excited about becoming a MITO Ambassador. Cars have been my life. I haven't known any different since a very young age. My dad's a mechanic and my grandad also. I love the automotive trade. I just think it's such a fun and exciting career that people can have and I'm really excited to be able to showcase that and hopefully educate, help and inspire more people to take up the trade!"

MITO will be working with Emma to engage the youth and women who are interested in automotives and want to pursue a career in the industry.

Stay up-to-date on MITO's Facebook and Instagram to see all that we are doing together with Emma.

Emma grew up in Dunedin where her father and grandfather were mechanics so from a young age she was exposed to the industry, helping her dad build go-karts and seeing the inside and outside of vehicles.

Emma competed in horse-riding for most of her early years but when she gave it a go in her 20's, rally driving became her main love and vocation. From there, she just exploded!

In 2008, teaming up with UK co-driver Claire Mole, Emma finished 16th Overall in the WRC Rally of New Zealand, and in 2009 the pair achieved Second Overall in the Asia Pacific Rally Championship.

In 2014, as a factory driver for the Hyundai USA Global Rally Cross team, she reached the finals in Las Vegas and the semi-finals of the X Games.

In 2016, she became the first woman to win a round of the New Zealand Rally Championship (NZRC) when she claimed victory in the Rally of Canterbury. Emma was runner-up in the NZRC over three consecutive years against world-class competition.

In 2021, Emma was signed to McLaren as their first female driver, a huge milestone in her career and an exciting opportunity to not only follow in the shoes of heroes such as Ayrton Senna, Niki Lauda, and Lewis Hamilton, but to drive in the new e-series races.

In 2022, Emma competed with McLaren in the all-electric Extreme E series alongside US driver Tanner Foust. Together they won McLaren's first podium in the Extreme E series with second place in Uruguay.