Primed for a promising career

At only 20 years old, Wayne Sandbrook is well on his way to a successful career as an Automotive Refinisher after being named the IAG Top Apprentice of the Year in Collision Repair for 2015.

Getting qualified plays an important part in gaining that self-assurance which only builds on the quality of your work.

Completing a National Certificate in Motor Industry (Automotive Body) (Levels 3 and 4) with strand in Refinishing, the MITO learner’s commitment to his studies, along with the additional time and effort he puts into mastering his skills, made him an obvious choice for the judging panel.

“When I found out I had received the award I was blown away,” says Wayne. “It had always been one of my goals and I had definitely worked very hard throughout the year to reach it — but to be recognised like that was so cool!” 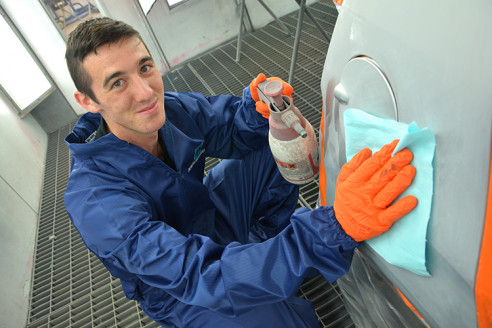 The IAG Trades Scholarship Programme aims to boost talent and strengthen the skill base of key industries by supporting a number of new apprentices through their apprenticeship. As Apprentice of the Year in Collision Repair, Wayne received a top of the line Vacuum and Random Orbital Sander which he is enjoying putting to good use in the workshop. “The new tools I received are amazing and quite an upgrade from what I was previously using,” he says.

Wayne is well known for his hard work, with Flintoff Carpainters & Panelbeaters owner, Peter Flintoff, recognising his potential early on. “Two months after Wayne joined us a more senior position became available,” says Peter. “Despite getting thrown into the deep end, he really stepped up to the mark and picked things up very quickly, which all comes down to his impressive work ethic.”

It’s a quality that could be attributed to his rather unique schooling situation. “I was home-schooled which allowed me the opportunity to do some work as a truck driver for my father,” says Wayne. “I would work from 5.30am to noon and would then do my school work in the afternoons and evenings. It was pretty tough but it taught me a lot about hard work. Plus, it has put me in good stead for combining work and my study towards a National Certificate!”

Now a year into working towards his first formal qualification, Wayne is taking what he is learning in his training and applying it directly to his work. “It certainly gives you an extra level of confidence knowing you’re doing the right thing – especially with the hands-on tasks,” he says. “I think getting qualified plays an important part in gaining that self-assurance which only builds on the quality of your work.”

It’s seeing that quality of work in the finished product being handed back to the  customer that Wayne rates as a particular highlight of his job. “When I first started I couldn’t believe the extent of the damage to some of the cars coming into the workshop. I thought there’s no way we could possibly repair them, but a week later, they’re being driven away looking brand new! It’s a hugely satisfying part of the job for me.”

With his eyes firmly set on his career in the industry, Wayne is now eyeing up his next goal — the Collision Repair Associations’ Golden Gun award next year. “If I could achieve that I’d be over the moon,” he says. “But for now, I’ll just keep working hard.”

Those that know him would expect nothing less.