Charlotte Procter, Karley Gorton and Lexie Cruickshank may be at different stages in their career, but they’re all stoked to have secured their positions at Max Pennington’s Autocity in New Plymouth. 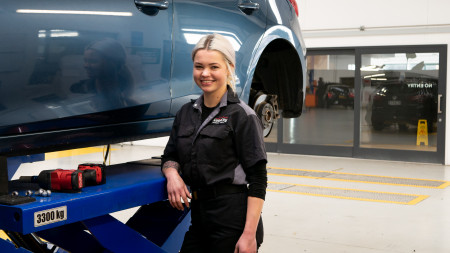 Karley says, “I’m very lucky with where I work. I get along with everyone here and they’re so supportive. It honestly couldn’t be better!”

As someone who’s taken on many apprentices over the years, Brian Heron, Service Manager at Max Pennington’s, makes it a priority to invest heavily in his apprentices. “We deal with 14 brands at this dealership and we’ve got lots of opportunities to put staff onto manufacturers training,” he explains. 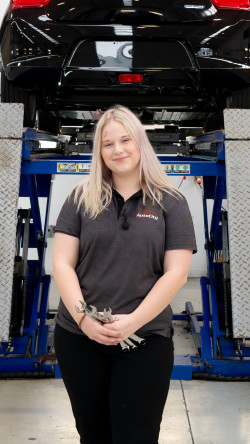 Despite originally training for a career in agriculture, Charlotte veered into the automotive world. “There weren’t a lot of agriculture-based opportunities here and cars were something I always enjoyed learning about.” She’s now completed her New Zealand Certificate in Light Automotive Engineering (Level 3 and 4) through MITO and hasn’t looked back.

Karley’s always had a strong interest in the industry, coming from family influence as well as a traumatic experience. “When I was younger, I was in a major car accident,” she explains. “Since then, I’ve always wanted to get involved and help with the safety side of things.” Karley’s since started the same training programme as Charlotte.

Both Charlotte and Karley praise the programme and their MITO Industry Training Advisor Croydon, with Charlotte saying, “I’m not the best with technology but I found the online Portal very simple and easy to use and Croydon does an absolutely awesome job.” Karley adds, “If I have any questions, I’ll just message or call Croydon and he always replies straight away.”

Lexie had a slightly different start to the industry, originally enrolling in StartUp®, MITO’s secondary school micro-credential programme for the automotive industry. “I’m a physical learner,” she explains. “I have to do something to learn it, so doing StartUp® and working in the workshop one day a week while I was at school was so much fun.” 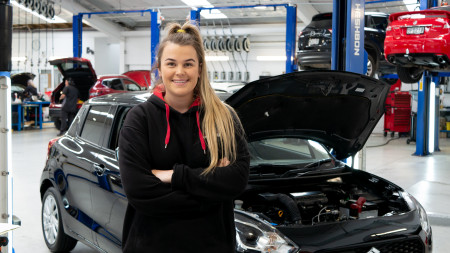 “It’s definitely a good start to a career,” Lexie says, as she’ll soon be starting her apprenticeship with Max Pennington’s and it’s no surprise based on her lifelong interest in cars. “My dad used to be in the automotive industry and I’d just follow him around and shadow everything that he did when I was a little kid,” she laughs.

Brian describes how much the industry has evolved, and continues to do so, catering to the strengths of young people. “There’s a lot of different technology emerging,” he says. “There’s a whole range of exciting areas, especially now that electric vehicles are coming on board in masses. Vehicles are not just engines anymore, there’s a lot more to them and there’s many great opportunities for youngsters to use their technological skillsets.”

Charlotte, Karley, and Lexie are all planning to stay in the industry in the future and look forward to embracing these changes, with Karley saying, “after my apprenticeship, I’d like to take it further and become a qualified automotive electrician. That’s where much of the industry’s heading and I’ve always enjoyed that side of things.”

Lexie has similar sentiments, adding, “I’d love to work as either a mechanic or something along the lines of electrical engineering would be cool.”

With baby number one on the way, Charlotte might see her work slow down a bit toward the end of the year but having children won’t be something that will put a stop to her career. “I definitely don’t see having a family holding me back and I’d like to set an example for my child that you can get back into it and do any line of work you want to.”