Shania Smith was keen to leave school as soon as she could. With little interest in academia, she was eager to get into full time work and leave the classroom behind. After leaving school at 16 and working in the hospitality industry for a few years, Shania bought herself an R32 Skyline.

“That Skyline had all the issues in the world,” she laughs. “After having it break down every few weeks, I decided that I really wanted to be able to fix it myself. I knew nothing about the car I had just purchased, and nothing about cars in general, which pushed me to pursue an automotive qualification.” 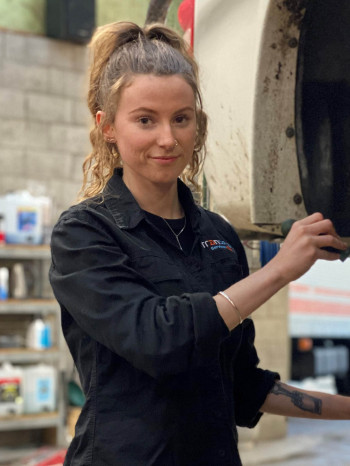 Now working as an apprentice automotive technician at Transpec Services Limited and completing a New Zealand Certificate in Light Automotive Engineering (Level 3 and 4) through MITO, 19-year-old Shania is loving learning a trade.

For someone who was never a fan of classroom-based learning, Shania thrives in a hands-on environment. “I could sit in front of a whiteboard for three hours and learn nothing,” she says. “But put me in front of a car for ten minutes, explain to me how things work, and I’ve got it.” Being able to learn something and then straight away put those skills into practice is one of her favourite parts about learning on-the-job.

Working with experienced technicians is a big motivator for Shania, and she loves that she can learn from her colleagues. “If I’m having an issue with something, someone in the workshop will have the knowledge, and can help me out,” she says.

Shania also enjoys the fact that she can complete theory elements of her programme on her phone via MITO eLearning. “You have it right in front of you whenever you need it, and it’s really straight forward and easy to use.”

For Transpec Services Limited Owner Warren Cleland, it was Shania’s drive and initiative that led him to offer her an apprenticeship. “Shania began with us doing work experience, and really proved herself during that time,” he says. “If there was nothing for her to do in the workshop, she would just pick up a broom and start sweeping – she showed heaps of enthusiasm.”

As a business owner, Warren’s advice for anyone looking for an apprenticeship is simple: “Make the effort to approach businesses face-to-face. You’ve got to show employers that you’re motivated.” “When Shania approached me, we initially gave her work experience, with no promise of an apprenticeship,” he explains. “Once I saw her motivation and initiative, I was really impressed, and it was a no-brainer to take her on as a full-time apprentice.”

Shania is the third apprentice Warren has taken on during his time as Transpec owner, and he plans on continuing this for as long as possible. “If we don’t train, we are going to run out of technicians,” he says. “If we’re training our own, at least we can train them our way.”

Once she is qualified, Shania has big plans for her future. “My goal is to slowly climb up the management ladder to the point of owning my own business one day,” she says. “I’d love to be able to sit back, look at what I’ve accomplished and think ‘wow, I did this myself.’”