Self-confessed petrol-head, Sophia Humphris, has always had a love for cars. Now the 23-year-old apprentice collision repair technician from Peter Simons Panelbeating, Auckland, has been named the 2018 IAG Top Apprentice of the Year in Collision Repair and is making her mark on an industry that is in need of more female advocates. 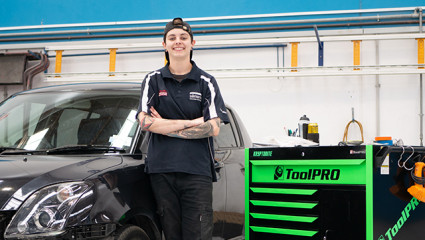 Sophia knows she is one of only a few females in a traditionally male industry, but is eager to enact change. “It’s can be physically demanding and challenging, but there’s no reason why more females can’t do this job."

The IAG Trades Scholarship programme, supported by MITO, aims to boost talent and strengthen the skill base of key industries by supporting a number of new apprentices through their apprenticeship. Sophia was selected from the 2017 intake of scholarship apprentices and took home a top of the line dustless sander and vacuum worth $2000, courtesy of Wyatt Machine Tools.

“I was so shocked to receive the award,” says Sophia. “I knew I had been nominated but never dreamed I would be chosen. It made me feel really good about my work and what I’ve accomplished so far as I try very hard with my training and ensure my work is done to a high-standard. It is extremely rewarding to be recognised for that.”

Sophia’s manager, Mason Turnbull, is rapt for her. “It’s a fantastic achievement and we are all very proud of her. We know Sophia gets a lot of enjoyment from her work. She has a great attitude and her skills and knowledge are progressing very quickly because of that. She’s definitely on her way to becoming a top technician.”

John O'Rourke, IAG Motor Assessing Performance Manager, says Sophia is a high-performing and self-motivated apprentice who has shown a particularly high level of commitment and focus. “The judges were thoroughly impressed with her overall attitude towards her trade,” says John. “Sophia is an excellent ambassador for all apprentices, particularly women, in the collision repair industry, and a worthy recipient of this award.”

Sophia knows she is one of only a few females in a traditionally male industry, but is eager to enact change. “It’s can be physically demanding and challenging, but there’s no reason why more females can’t do this job. One day I want to run my own shop – and to make it mainly female-oriented. That way it will give more women a place to get their foot in the door and experience the industry. I’m extremely grateful to Peter Simons for giving me that same chance and I think I’ve done him proud with this award. Now I want to show others that you can achieve any goals you set for yourself.”

Prior to joining the industry, Sophia spent four years working as a Chef for the New Zealand Navy, but longed for a job in the industry that she was truly passionate about. “I didn’t care which part of the industry I worked, I was just adamant I wanted to work with cars,” says Sophia. “I was lucky enough to get hired as a groomer here at Peter Simons Panelbeating and from there I fell in love with the collision repair trade.”

Now, Sophia is completing a New Zealand Certificate in Collision Repair (Non Structural Repair) (Level 3 and 4) through MITO and can’t rate doing an apprenticeship highly enough. “If you’re an active, hands-on person, I think it’s the best thing you can do. It gives you lifelong skills, you get paid to learn and the opportunities are endless!”