However, it wasn’t long before his passion for mechanics enticed him back, and he asked his manager about the possibility of starting a heavy vehicle apprenticeship.

Timo admits that he was hesitant about approaching his manager. “I did hesitate a little because of my age,” he says. “I was also worried that I wasn’t smart enough, and that I would struggle with the work.”

Less than two years later, and Timo has completed his National Certificate in Motor Industry (Automotive Heavy Engineering) with strand in Road Transport (Level 3 and 4) through MITO, proving to himself that he had nothing to worry about. In fact, Timo excelled in his apprenticeship, completing in half the time that the qualification is expected to take.

“I really pushed myself to learn as much as possible,” he says. “I did my bookwork from 5pm to midnight six days a week. I even did everything in pencil first and then went back over it in pen to double check my answers.” 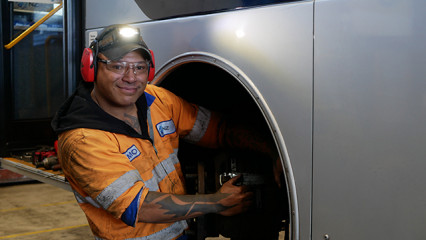 “You’ve just got to focus on your goals, and enjoy the experience. I really believe that if you put your mind to something, anything’s possible.”

Where did this incredible drive come from? “I just focused on what I wanted to achieve, and tried to enjoy it at the same time!” He says.

Timo also credits his wife and children as great support during his apprenticeship. “I’d come home and tell them I’d passed another assessment and they’d all be excited for me. It was awesome to have that support.”

“The team at MITO were also a huge help during my apprenticeship,” Timo adds. “My Industry Training Advisor, Tom, was really great. I honestly can’t find the words to say how much I appreciated his help throughout my training programme.”

Wayne West-Barron, Senior Fleet Supervisor at NZ Bus, can’t speak highly enough of Timo. “He’s been one of the most outstanding apprentices we’ve had through the business, no doubt about it.”

John Connell, NZ Bus Regional Fleet Maintenance Manager, couldn’t agree more. “After completing his apprenticeship he’s slotted into the team perfectly as a full-time worker. It’s good for us because we know his track record, we know what he’s like as an employee, and we know the quality of his training.”

Now that he’s finished his study, Timo is itching to get right back into more training. “I’m not doing bookwork anymore, so I’m at home and I’m all fidgety - my wife keeps telling me I need to get a hobby!”

He’s keen to get stuck in to MITO’s First Line Management Programme, and with his drive and work ethic, he’d be the perfect candidate. “I don’t want to be on the tools for the rest of my life,” he says. “So management is the next obvious step for me.”

“At my age, I didn’t think I could do something like this,” Timo says. “You’ve just got to focus on your goals, and enjoy the experience. I really believe that if you put your mind to something, anything’s possible.”