The recipient of the 2018 CRA Apprentice of the Year – Golden Hammer award was 26-year-old Jordan Lindsay-Smith from Bush Road Panelbeaters, Auckland.

Jordan’s genuine passion for the trade and his desire to excel in the industry were noted as particularly strong and commendable traits by the judges. They were impressed by his enthusiasm, drive, confidence, and most importantly, his willingness to constantly learn more. 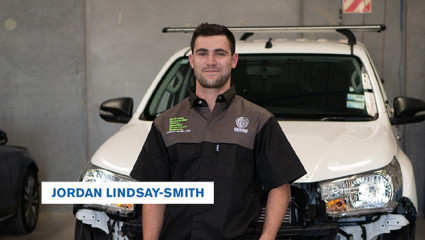 “It’s such a rewarding industry to work in. There’s something so satisfying about seeing a car come into the shop in a bad state, and then seeing it drive out after being fixed and painted.”

After leaving school unsure of what he wanted to do, Jordan began an apprenticeship at Bush Road Panelbeaters, and soon found that he had a passion for the industry. He worked hard to complete his MITO training programme in record time, and quickly achieved a National Certificate in Motor Industry (Automotive Body) with strand in Collision Repair (Level 3 and 4).

Now, he couldn’t be happier with his decision to jump into the trade and get qualified. “It’s such a rewarding industry to work in,” he says. “There’s something so satisfying about seeing a car come into the shop in a bad state, and then seeing it drive out after being fixed and painted.”

It’s the hands-on nature of the trade that keeps Jordan interested in what he does. “I’m just not an office worker kind of guy,” he laughs. “I was always into cars before I started working here, so it’s awesome that now I get to work with them every day.” And, he adds, “I can also work on friends cars and my own car in my spare time – it’s great that the skills I’ve learnt are useful outside of work too!”

Jordan’s passion for the industry was proven when he was named the 2017 IAG Top Apprentice of the Year in Collision Repair. “Winning that really motivated me,” he says. “So when the opportunity arose for me to apply for the Golden Hammer award, I jumped at the chance.”

Upon finding out he had won, Jordan was excited, surprised, and even more motivated to push himself to succeed in the industry. “Having this achievement to my name makes me really proud,” he says.

Sheilds Bros Director Grant Sheilds has nothing but positive things to say about Jordan. “Jordan is an outstanding employee,” he says. “He’s very motivated – his drive is fantastic.”

In the future, Jordan is eager to open his own shop - but for now, he’s focused on honing his skills and spending as much time on the tools as possible. “There are guys who have been in the industry for 30-40 years who are still learning,” he says. “I’ve only been doing it for 5-6 years, so I know I’ve still got quite a long way to go in terms of fully mastering the trade.”

The future is definitely bright for Jordan. His commitment to his trade is commendable, and there’s no doubt that throughout his career he will continue to be a valuable asset to the industry.