At just 24-years-old, Tom Nikolaison has already had a pretty impressive career journey. Straight out of school he began his time with Tranzit Coachlines, completing his apprenticeship. He qualified as a heavy vehicle mechanic through MITO, and then went on to receive a 2020 MITO Alumni - Electric Vehicle scholarship. He’s now completing his New Zealand Certificate in Electric Vehicle Engineering through MITO, with a goal to specialise in electric vehicles.

Tom had always enjoyed engineering and fixing things, so for him, choosing a career path was an easy process. “I’ve always been practical minded and enjoyed the hands-on subjects at school,” he says. “A career as a diesel mechanic just made sense to me.”

With a natural talent for working with his hands, by the time he was in his final year of high school, Tom had built an award-winning hydraulic wood splitter as his Year 13 project. “After I left school I decided to drive around workshops with my CV and my wood splitter, and show them what I was capable of,” he explains. “Tranzit was impressed, and that was that!”

Tom completed his heavy vehicle apprenticeship through MITO and enjoyed being able to learn on-the-job. “I’m a practical minded person, so I learn a lot better by doing things,” he says. The decision to get qualified was an easy one for him. “Tranzit offered me an apprenticeship and of course I took the opportunity – having a qualification means more money, more knowledge, and you can improve your skills.” 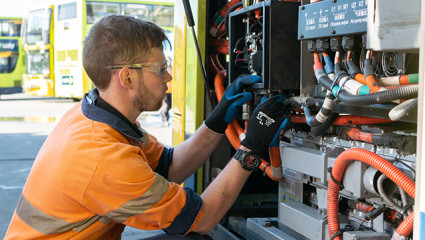 “Now that I’m working so closely with the electric buses, the goal for me is to specialise in electric vehicles, and really get as clued-up as I can on them."

“We will incrementally add the 31 new double-deck electric buses (EVDDs) to our Wellington fleet meaning soon there will be a fleet of 41 EVDDs transporting passengers around Wellington.”After over five years with Tranzit, Tom has now progressed into a role that focuses heavily on the company’s fleet of electric buses. “We’ve just purchased another 31 electric double-decker buses,” Tom says.

As a MITO Alumni - Electric Vehicle scholarship recipient, Tom’s fees for the entirety of his programme are covered. The New Zealand Certificate in Electric Vehicle Automotive Engineering (Level 5) for learners who have previously completed an automotive apprenticeship through MITO, and provides them with the skills and knowledge to safely inspect, service and repair electric vehicles.

The scholarship came at the perfect time for Tom, who was already planning on completing an electric vehicle qualification. “My mum saw it advertised and sent it to me,” he says. “I thought I may as well give it a shot!”

“In all honesty, I don’t think I would have been too keen on EVs if the opportunity to work on them wasn’t handed to me,” says Tom. “The opportunity was there so I thought I may as well, and now I want to learn as much as I can – electric vehicles are the way of the future.”