STARTUP® LEADS TO SUCCESS FOR STANLEY

For Ruahine Motors Workshop Foreman Craig Fairgray, apprentice automotive technician Stanley Apolonio is everything he looks for in an apprentice. “From the moment Stanley started working for us, his work-ethic has been unbelievably good,” he says. “He listens, he asks questions, and he applies himself – he’s the kind of apprentice that every business owner looks for.”

For Craig, Stanley’s initiative really stands out as one of his best qualities. “He’s not one to sit around waiting for something to do,” he says. “He doesn’t mind sweeping the floor or cleaning up, and you never have to tell him to do it, he’ll just get on with it himself.” 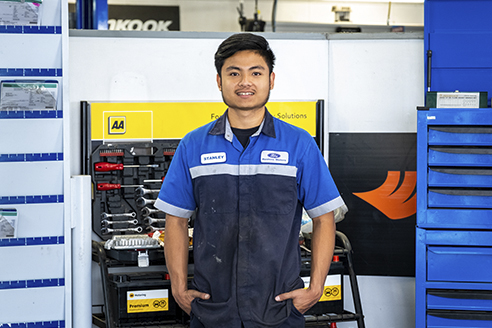 Stanley is completing a New Zealand Certificate in Light Automotive Engineering through MITO.

19-year-old Stanley initially began work experience at Ruahine Motors once a week while he was at secondary school, as part of MITO’s StartUp® programme. StartUp® offers Year 11 to 13 students the opportunity to gain experience in an automotive workshop while achieving micro-credentials. Students complete theory courses via eLearning and spend one day a week in a workshop to complete their practical assessments.

Stanley highly recommends StartUp® to students who think they may be interested in a career in the automotive industry. “Doing StartUp® is a great way to get experience in a real workshop and learn the basics of automotive engineering,” he says.“I didn’t know exactly what I wanted to do for a career, so I was trying out a lot of different options while I was at school,” Stanley explains. “I’d always been interested in cars and how they worked, and as soon as I began StartUp® I realised I really enjoyed the automotive industry and wanted to pursue a career in it.”

After completing the StartUp® Ignition programme and impressing supervisor Craig, Stanley was quickly offered an apprenticeship and began his New Zealand Certificate in Light Automotive Engineering through MITO. When asked what his favourite part of his role is, Stanley laughs; “To be honest, I just really enjoy doing the job! All of it!”

Looking at Stanley’s progress so far, it’s evident that he has a natural ability – only six months into his training programme and he is already over halfway through his apprenticeship and is loving learning on-the-job. “The eLearning aspect of the programme has been really great too, there’s heaps of information on there that has taught me extra things that I may not have necessarily learnt in the workshop.”

“When you enjoy your job, it doesn’t feel like work,” says Stanley. “I get to be hands-on, and work on different cars every day – it’s never boring!” Stanley adds that his co-workers also make his job even better. “Working with a team of good people is a bonus – I get to learn from experienced people who can teach me how to do things properly, which is great.”

Looking to the future, Stanley knows he definitely wants to complete more training after he finishes his apprenticeship. “I’m not sure exactly what kind of training I would like to do, but I want to make sure that I’m always bettering myself, always learning something new,” he says.

Judging by his achievements so far, paired with his impressive work-ethic, this is just the start of a successful career in the industry for Stanley.