SOMETHING TO BE PROUD OF

For Fay Bateman, pursuing a practical career was a no-brainer. “I just love fixing things,” she says. “According to my family, I’ve always been this way.” From a young age Fay was fascinated with how things worked - she loved putting things together and taking them apart. So, when it came to deciding on a career, Fay knew that no matter what she chose, she wanted her job to be hands-on.

Straight out of high school, Fay completed a building pre-trade, then began working on building sites while undertaking a building apprenticeship. “I did that for two and a half years, but eventually I lost interest,” she says. 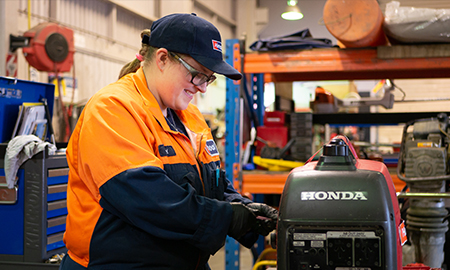 Still keen to be doing hands-on work, she decided to pursue a career where she could fix things, and a job in the outdoor power equipment industry really appealed to her. “I liked the idea that I could play with the same tools I was using on the building site, but that I wouldn’t have to be carrying round 40-kilogram bags of concrete while I did it!” she laughs.

Fay explains that one of her main motivators for getting qualified was her desire to be taken seriously in an industry that has traditionally been male dominated. “Having this qualification definitely helps,” she says. “It shows that I really know what I’m doing, and that I’m capable of doing the job.” Fay adds that her qualification is also her first official tertiary qualification. “I wanted to make sure I had some kind of qualification to my name,” she says. “It’s something to be proud of.”

Day-to-day, Fay’s job keeps her busy, and she enjoys the fact that she always knows what to expect. “Usually I’ll spend the mornings doing scheduled services and the afternoons doing repairs on things like lawnmowers, chainsaws and generators.” For Fay, it’s the satisfaction of fixing things that drives her and keeps her excited about her work.

“It’s a great feeling when you fix something, especially when you’ve been working on it for a while,” she says. “You have that moment when you figure out what the issue is, and it’s really rewarding.” She also enjoys being able to physically see the results of her efforts: “Taking something, fixing it, and making it work better than it was before is the best – you can see the results of your hard work, which isn’t always possible in an office job.”

Although Fay has completed her qualification, she admits she still has more to learn. “Just because I’m qualified doesn’t mean I know how to do everything – I’m still learning every day.” She’s considered moving into management in the future, but for now is quite happy where she is. “I think being on the tools is the best – less stress, less paperwork, and dealing with staff seems a little more challenging than fixing things!”