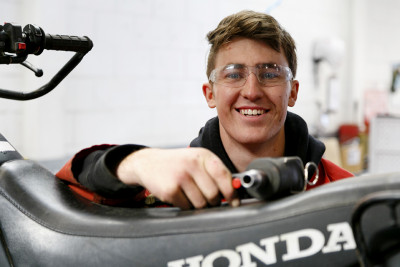 18-year-old Shane Turner always knew that he wanted to work in the motorcycle industry, however it was a chance encounter at a careers expo that really pushed him to pursue his goal.

“I went to the Taupo Careers Expo with school a couple of years ago,” he says. “While I was there I met MITO Industry Training Advisor Dene Barnett, and had a really good chat with him. He explained the benefits of an apprenticeship, and everything I would need to do to complete one. It really gave me that motivation I needed.”

Now, Shane is an apprentice motorcycle technician at Huka Honda, Taupo. He’s completing the New Zealand Certificate in Motorcycle Engineering through MITO, and couldn’t be happier working in the industry he’d always hoped to build a career in. “I’ve been into bikes since I was six,” he says. “My stepdad got me into them, and now I’ve got one of my own that I work on too. I’ve got friends who ride as well so I’m always around them.”

Currently three months into his apprenticeship, Shane is loving the fact that he can work full-time, and learn on-the-job, while working towards a nationally recognised qualification. “I always knew that an apprenticeship was something I wanted to do – I wanted to set myself up with a solid skillset in the industry.”

I always knew that an apprenticeship was something I wanted to do – I wanted to set myself up with a solid skillset in the industry.

One of Shane’s favourite parts of his training programme is the eLearning. Through MITO eLearning, Shane has access to hundreds of videos, interactive simulations and theory assessments, all of which can be accessed from a PC, tablet, or mobile phone. “It’s really helpful,” Shane says, “and a great way to learn.”

Given Shane’s obvious passion for anything bike-related, when asked what his favourite aspect of his job is, his answer comes as no surprise: “just the fact that I get to work on bikes every day!” he laughs. “I really enjoy being around the other mechanics too,” he says. “We have a great team here and we all get along really well.”

For Shane, the hands-on nature of the job is also a huge bonus. “I’d rather do this than be sitting at a desk doing paperwork – it’s the perfect job for me!”

Shane’s supervisor Andre is beyond pleased with Shane’s progress so far. ”He’s doing really well. He’s probably one of the best apprentices we’ve had – and it’s really hard to find them!”

“We’re big on taking on apprentices here,” says Andre. “It’s an investment in the long run, and while it can sometimes be a little more work at the start, it makes a world of difference later on.”

While he’s open to the idea of working his way up and becoming a manager one day, Shane admits he’s also perfectly happy with the idea of staying on the tools. “The mechanical stuff is what I really love, so if I’m doing that for the rest of my life, I’ll be happy.”