Ryan Hulena and Caleb Churchward have a lot in common. Both attended Central Hawke’s Bay College and now at 19 years old, both are completing the National Certificate in Motor Industry (Automotive Heavy Engineering) with strand in Road Transport (Levels 3 and 4) through MITO. They also share the view that MITO’s StartUp® programme has had a significant influence on their decision to pursue careers in the automotive industry.

I was 100% sure that a career in the automotive industry was right for me and StartUp® was the stepping stone that really pointed me in the right direction.

MITO’s StartUp® Gateway programme offers year 11 to 13 secondary school students learning opportunities in the automotive industry while allowing them to gain up to 42 credits towards NCEA Level 1 and Level 2. It’s a programme that is highly rated by Ryan and Caleb’s college Gateway Co-ordinator Kim Walker. “Being in an automotive workshop for one day each week and gaining real-life experience is greatly beneficial,” says Kim. “It enables students to hone their customer service skills and teaches them time management because they have to keep up with their schoolwork too.” 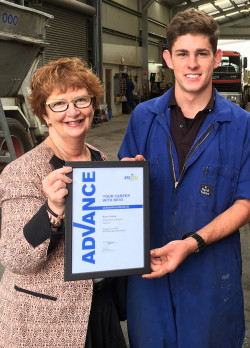 The first step was to find an apprenticeship role, something which Ryan did straight after leaving school. “One week after I left school I approached Stephenson Transport and they put me straight into an apprenticeship.” Ryan then applied for a 2016 MITO Kick Start Scholarship, which he was awarded. Since then he’s shown no signs of slowing down, aiming to do further training once he’s finished his current programme.Prior to StartUp®, Ryan was already getting a taste of the automotive industry through after-school jobs at local workshops. However, it was the programme that really set the wheels in motion for him. “In the later years of school I approached my gateway co-ordinator who arranged for me to do the StartUp® programme, which solidified my focus,” Ryan says. “I was 100% sure that a career in the automotive industry was right for me - StartUp® was the stepping stone that really pointed me in the right direction. From there, it was just about taking bigger steps!”

Caleb completed the StartUp® programme with Farmers Transport and was quickly employed as an apprentice due to his great attitude. “During the StartUp® programme my employer saw how well I worked but also that I fitted into the team, so they took me on as an apprentice.” Now, one year into his training programme, he highly recommends it. “It’d be awesome to get more people out there doing a trade and getting qualified. My advice for future apprentices is to keep your head down and get your bookwork done - nothing’s going to happen if you don’t! Once you get your foot in the door, it’s all up to you and how far you’re willing to go.”

Ryan’s supervisor at Stephenson Transport, Dean Gough, sees the StartUp® programme as a great opportunity for school students. “It’s a great way for young people to gain experience while they’re still in school. Getting them into the habit of doing one assignment per week ensures they can handle the theory side if they become an apprentice.” Dean also offers some words of wisdom for employers. “There’s a shortage of qualified workers in the automotive industry and the only way to resolve that is to train more people. The long-term benefits of bringing a young person into the workplace are definitely worth it.”