When asked what his advice for budding automotive technicians is, MITO graduate Eugene Bensemann has just one thing to say: “get qualified!”

Looking back at his career journey so far, it’s easy to understand why he’s such an advocate for vocational education.

Eugene has been working in the automotive industry since he left high school. A career with cars was a natural choice for him – he was always tinkering with his own car, as well as working on fixing cars for friends and family.

He began his time on the tools at a small workshop in Seaview, Wellington. He then went on to spend two years in Edinburgh, Scotland, working for Toyota and honing his skills.

“Once I got back to New Zealand the Government’s Fees-free scheme was in place, so I jumped at the chance to get qualified for free,” he says. He soon began working at King Toyota, Lower Hutt and was able to complete a New Zealand Certificate in Light Automotive Engineering (Level 3 and 4) through MITO. 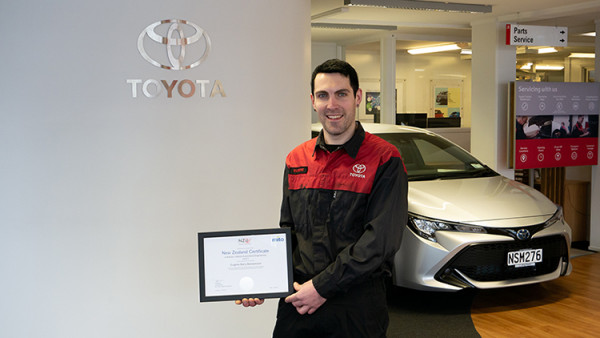 “In 2020 I saw an ad for the MITO Alumni – Electric Vehicle scholarship,” says Eugene. “Hybrid and electric vehicles have always interested me, so it was a no brainer for me to apply for it.” Following his successful application, Eugene then went on to complete the New Zealand Certificate in Electric Vehicle Engineering (Level 5).

“I’ve been on the tools for years now, but there’s always more to learn in this trade,” he says. “The electric vehicle training programme was a great chance for me to gain those specialised skills that are so important – these are vehicles with 400 volts running through them, so it’s vital that you know what you’re doing!”

He continues, “the way that MITO had set out the programme by teaming up with AECS as a provider was brilliant. There’s so much shared knowledge, especially attending the off-job-training with other mechanics who have been in the industry for years – it’s amazing just how much you learn.”

Eugene now divides his time between two roles – working as a diagnostic technician at King Toyota, as well as working as an entry certifier of vehicle imports. Eugene’s electric vehicle training is helpful in both. “At Toyota I see a lot of hybrid vehicles, so the training is really useful when it comes to dealing with the high voltage hybrid batteries found in all of the Toyota hybrid models,” he says. “As for my compliance role, we’ve got lots of electric vehicles coming into the country right now, so we see a lot of Nissan Leafs, as well as a rise in Teslas. Having that specialist electric vehicle knowledge has been incredibly beneficial when inspecting these vehicles.”

As for his plans for the future, Eugene is hopeful that he will soon be able to combine his specialist electric vehicle training with his compliance experience to work in a role that merges both. “I’m hoping that eventually some really interesting positions start popping up as electric vehicles become more common. There will be new regulations and legislations specifically for electric vehicles, and because of my training I will have a good jump start on that.”

“This is an industry that is always changing, and it’s pretty exciting change,” he says. “The technology is amazing, and it moves fast for a reason. It’s a really exciting time to be involved.”