Unlike many that pursue careers in the automotive industry, it wasn’t any particular passion for vehicles that motivated Rex Matthews to begin an apprenticeship. “When I was in high school I was really into computers, so I was more interested in the technology inside the cars than the cars themselves,” he says.

Knowing that university just wasn’t for him – “I was eager to get into the workforce as soon as possible and not have the burden of a student loan” – Rex got a taste of the industry after doing work experience in an automotive workshop, and realised that he really enjoyed the mechanical side of things as well as the technological aspects of the job. 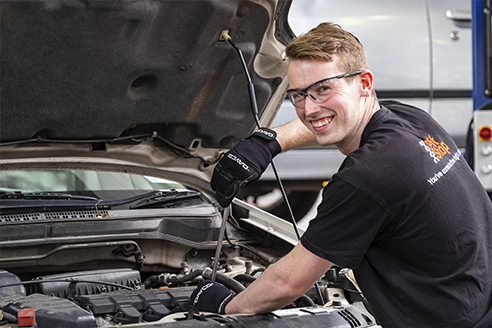 After completing his apprenticeship and achieving a National Certificate in Motor Industry (Automotive Electrical and Mechanical Engineering) (Level 4) through MITO, 25-year-old Rex began working as a qualified automotive technician at Pit Stop Napier. Always eager to develop his skills, Rex then went on to apply for and receive a 2019 Clyde Cunningham QSM Memorial scholarship.

Established in honour of the late Clyde Cunningham, a long-standing MITO employee, the scholarship, which is awarded to a MITO automotive graduate in the Hawke's Bay region, pays the programme fees for MITO’s New Zealand Certificate in Business (First Line Management) (Level 4) qualification.

Rex explains that his motivation behind applying for the scholarship was simple: he wants to be as knowledgeable as possible about the industry in preparation for owning his own business. “Getting as much training as I can under my belt is really important to me,” he says. “The programme is really helpful – if I wasn’t completing it, I would have no idea how a business is run, or all the things that have to happen in the background to make that business successful.”

Pit Stop Napier owner Blair Morgan sees Rex as a vital part of the team. “He’s an excellent worker who is very dedicated to what he does,” Blair says. “He’s very methodical and always puts in that extra effort into everything – he’s really excelled while he’s been here.” People skills are also a large part of Rex’s role, and Blair notes that Rex thrives in a customer-focused environment. “He’s got the ability to explain to the customers the details of the work that has been carried out in a way that is really easy to understand, which they appreciate.”

Blair says the First Line Management programme will be great for Rex’s professional development. “I’ve seen parts of the programme and I’m sure it will benefit him hugely. I think that Rex will come out of this with a set of skills that will allow him to run a workshop anywhere in the country – he’s definitely management material.”

Once Rex completes his First Line Management qualification, he’s got no plans of slowing down, and has applied for a second MITO scholarship, focusing on his goal of training as much as possible. “When I eventually take on my own business, I want it to be successful, and a lot of that will be down to the knowledge myself and my staff possess,” he says.

“There’s so many new things going on in the industry, so I’ve got to keep up – you’re never going to have exactly the same problems day in and day out, and that’s what keeps it exciting.”