While completing a degree in psychology, Rose Wylie bought herself a run-down motorbike. She spent hours in her garage fixing it up, using Google and YouTube tutorials to guide her. It was during those hours in the garage that Rose realised psychology wasn’t what she wanted to be doing for the rest of her life.

“It clicked for me one day that I was truly happy when I was working on my bike,” says Rose. From there, she made the choice to leave psychology behind and pursue a career in the automotive industry.

Now, 25-year-old Rose is an apprentice light vehicle mechanic at Rutherford and Bond Toyota, Wellington, and is completing a New Zealand Certificate in Light Automotive Engineering through MITO. “Toyota is such a great place to work,” says Rose. “We get to work on a lot of newer vehicles here, which is really interesting. They’re all really hi-tech, so it’s great to be exposed to that kind of technology, and to learn on-the-job about all the new functions.”

Rose spends her days doing servicing and diagnostic work, and loves being able to see the results of her efforts. “With psychology, it’s not really a case of just fixing something and it’s done. In this line of work I love the satisfaction of being able to see something come in, fix it, and know it’s going out the door safer than it was when it came in.” 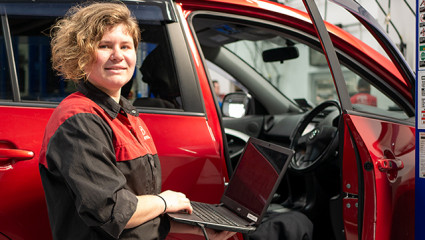 "I love the satisfaction of being able to see something come in, fix it, and know it’s going out the door safer than it was when it came in.”

While Rose loves being able to be hands-on every day, it’s the people she works with that make her love her job that much more. “Everyone here is so supportive and work as such a great team. We all just want to see each other succeed which is really nice.”

As someone who has done a complete 180 career wise – “I definitely received some backlash when I decided to make the switch from psychology to automotive!”- Rose is all for people giving their passions a go as a career. “It’s really important to follow what makes you happy and not worry about what other people will think,” she says.

Rutherford and Bond Workshop Manager Strat Campbell was impressed by Rose from the moment he interviewed her, and sees her as a valuable part of the team. “She’s really eager to learn, and puts her hand up to do anything,” he says. “She’s also very efficient at what she does, and the quality of her work is coming out at a really high level which is fantastic – she ticks all the boxes for us.”

For Strat, having apprentices in the workshop is a vital part of the business. “The biggest benefit for us is that we are able to train our apprentices exactly how we want them to be trained,” he says. “Then, as they work their way up the ladder, we can bring in more apprentices and begin the process again. That way we know all of our staff are trained to our standards.”

Now well on her way to becoming qualified, Rose has no regrets about her change of career path, and strongly encourages others to consider a job in the industry. “I understand that as a female the thought of being the only woman in a workshop can be a little daunting, but I’ve had no issues with it at all,” she says. “If it’s a passion of yours, just go for it – you won’t regret it.”