Julius Bloem is working in a job he loves, in an industry he loves.

While at school Julius wasn’t sure what he wanted to do. But with a passion for cars, he took part in MITO’s StartUp® programme, which enabled him to spend one day a week in an automotive workshop. “It was then I knew I wanted to be a mechanic, working specifically on performance and race cars,” said Julius.

I am in a much better position than my university friends – I’ve just bought my first home!

He left school at 18 and started work at a high performance car specialist, where he was offered an apprenticeship through MITO. After completing his National Certificate in Motor Industry (Automotive Electrical and Mechanical Engineering) (Levels 3 and 4) Light Vehicle, he became a qualified automotive technician. 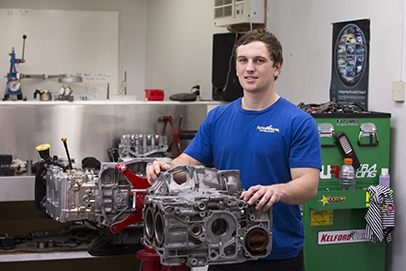 In 2013 Julius won the MTA Apprentice of the Year. “Winning that award was always a long-term goal of mine. My grandfather was an Apprentice of the Year so it was something I was really determined to do.” The prize package included a trip to Sydney for some hands-on experience with a V8 racing team in the final round of the 2013 V8 Supercars – with New Zealand Supercar driver Greg Murphy calling him to let him know he’d won! “The whole experience was awesome,” said Julius. “I assisted in a number of panel repairs caused by the tight street circuit, as well as maintenance of the car and pit crewing. Greg’s dad, Kevin, was even my personal tour guide – it was an amazing experience.”“I really enjoy having the privilege to work on these race cars with such a talented team. I’m so glad I did my apprenticeship, and would highly recommend it. The financial aspect really appealed and I am in a much better position than my university friends – I’ve just bought my first home!”

Julius was also the recipient of a 2015 MITO Business Skills Scholarship, completing MITO’s First Line Management programme. The one-year programme provides a professional development opportunity for people aspiring to management excellence. His natural leadership ability, passion and willingness to continually expand his skills saw him progress from being an apprentice, to a qualified automotive technician, and has recently been promoted to general manager of Possum Bourne Motorsport Ltd in Pukekohe – at just 23 years old!