MOTORSPORT AMBASSADOR ON HER WAY TO QUALIFIED TECHNICIAN

You could say that Amy Hudson’s automotive journey began early, from the influence of her family’s involvement in motorsport. “My parents have been around motorsport for about thirty years so cars have been an interest of mine since I was born,” Amy explains.

Amy was the co-driver in the 2018 New Zealand Rally Championship FIA 2WD Category 2 winning car, and in 2019, she was appointed the first New Zealand Women in Motorsport Ambassador.

“I’ve been involved in the New Zealand Rally Championship for the last five years now,” she adds. “I co-drive with my fiancée. I’ve been around the sport my whole life. Once I turned twelve and I could compete, it grew from there.” 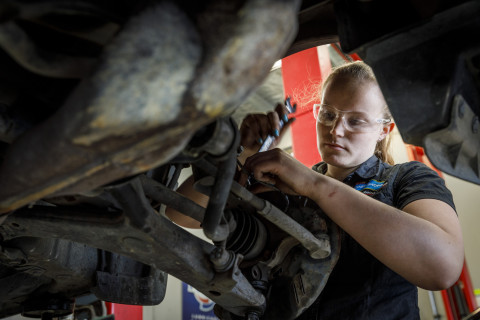 It was no wonder that Amy found herself working as an apprentice automotive technician at Auto Super Shoppe Shirley in Christchurch.

Amy’s manager, Andrea Summerfield, says that her passion for motorsport made her a prime candidate for an automotive apprenticeship. “I think the link with her motorsport helps,” Andrea says. “You do have to be passionate about cars to be a mechanic and she does have an interest in vehicles because of her sport.”

Amy started by working in the office, but after several months, she knew she needed a change. “I wanted to get into the workshop,” Amy explains. “I asked if it would be a possibility and for a couple of months, I trialled it, learning the ropes. After that, an apprenticeship was the next step.”

Amy’s now completing a New Zealand Certificate in Automotive Engineering through MITO, and with Level 3 of the programme under her belt, she’s geared up to complete Level 4.

Andrea sees the importance of training apprentices for the future of the industry, having taken on several in the past. “We’ve had an apprentice most of the time,” Andrea says. “We have another starting soon as well!”

“Amy’s handling her apprenticeship very well,” Andrea adds. “She’s very methodical in her work. Theory wise, she’s motoring through it and in terms of her practicals, she’s gaining confidence in her work as she learns and progresses through her training.”

Day-to-day, Amy’s work varies, giving her a comprehensive introduction to the trade. “I work on warrant repairs, servicing, diagnostics,” she describes. “It just depends on what comes in on the day. Even if it’s something a bit more complex, my supervisor will show me, so I get to learn a bit of everything.”

“I understand what I’m learning more if I’m working on it myself as opposed to just listening or reading about it,” Amy says. “It’s always good to figure out how things work, pull things apart and understand them a bit more. Getting to do that for a job is pretty cool.”

Once qualified, Amy sees herself getting specialised in one area. “What that specialisation is, I’m not quite sure! It’s probably going to be down the electrical route,” she says. “That’s sort of the way the industry’s headed. But right now, my goal is to get qualified and go from there.”

If you’re just starting out, Amy says, “there’s always jobs somewhere in the industry. Even if it’s not exactly the role you want to start with, getting to know the industry is a good start.” Auto Super Shoppe have a three-month automotive apprentice training academy, which can help people at the beginning of their career. After completion, learners will be placed into employment within the Auto Super Shoppe network nationwide to complete their training.