If anyone knows the importance of a well-trained apprentice in an automotive workshop, it’s Russell Josiah, CEO of Bike Torque in Taumarunui. Since establishing the business in 1986, Russell has trained almost twenty apprentices, accumulating a long list of National Titles in motorcycle racing, with many getting head-hunted and scoring top engineer roles around the world. “I’ve had a couple of guys that’ve done apprenticeships here and have worked their way up to become chief engineers for GP teams,” he says. 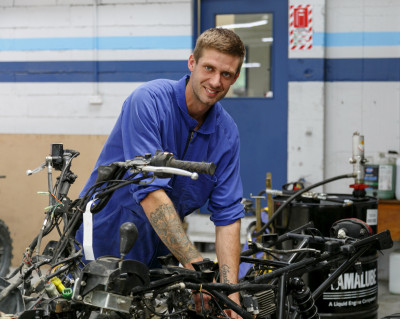 Russell explains how well-prepared the apprentices that train through his workshop are for the industry, saying, “we do a lot of suspension work, engine tuning, race bikes such as Formula 3 and motocross, on and off-road, and side by sides in house so they get a well-rounded motorcycle engineering experience here.” Preparing machinery for racers is the passion of the business and the skill level of the technicians must be at a high standard to win championships.

”The motorbike passion runs in the family, with Russell’s son Jette Josiah, mechanic at Bike Torque, having qualified through MITO. “I’ve been at Bike Torque since high school,” he states. “I intended to follow that path from the start. I’d definitely recommend it to anyone as a skill for life.”

For Jette, this interest expands to more than just work. “I’ve pretty much raced motorbikes my whole life,” he says. “It’s just started up again now after COVID so I’m excited to get back into it.” 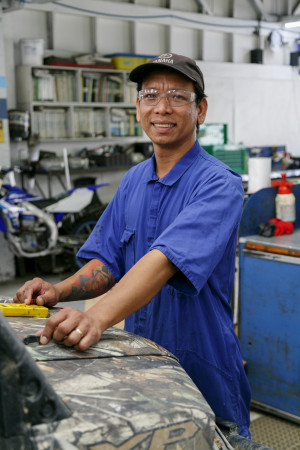 Much like Jette, Ryan De Leon, senior mechanic at Bike Torque, developed an interest in motorbikes from his family. “My father is a diesel mechanic back in the Philippines, so I started learning about engines, especially four-wheel vehicles, from him,” he says.

Ryan moved to New Zealand with the intention of gaining a qualification and eventually bringing his family here. He recently completed his New Zealand Certificate in Motorcycle Engineering (Level 3 and 4) through MITO. Ryan explains that he chose this path because the popularity of motorcycles is growing, saying, “more and more people are using motorcycles because they’re more fuel efficient and a convenient means of transportation. Especially back in the Philippines, heaps of people ride motorcycles because of the traffic!”

Russell outlines how important it is for apprentices to have a strong interest in what they do. “All we do is sell and repair motorcycles, so I try to hire guys that have a passion for it so it’s not just a job.”

Russell praises Ryan’s work ethic, mentioning that, “we set a high bar in terms of the level of work they’ve got to put out and Ryan’s very reliable. He’s a very disciplined and well-trained mechanic.”

Both Jette and Ryan commend their MITO Industry Training Advisor Dene, for supporting their training. Jette says, “Dene was awesome with helping to get us through our apprenticeships,” with Ryan adding that Dene encouraged him to enrol in the training programme while Dene was completing his routine checkups with his other Bike Torque learners. “I wasn’t familiar with the process but with the help of Dene and my boss Russell, I got through it all,” Ryan says.

In terms of what the future holds for Ryan and Jette, both want to stay in the industry and develop their skills even more. Ryan states, “my goal is to live in New Zealand permanently with my family and if there’s any opportunity to level up, why not?”

Russell describes Jette as an, “all-rounder,” with Jette adding that he’s been expanding his skills to other aspects of the workshop. “I plan to take over the business. I’ve been doing a bit of everything lately, learning things like parts and sales. And who knows, I might just have to do another apprenticeship!” he laughs.