In October 2018, New Zealand was represented at the world final of the Hitachi Top Technician competition in Japan. Facing off against countries such as Russia, China and India, we finished in an impressive second place. 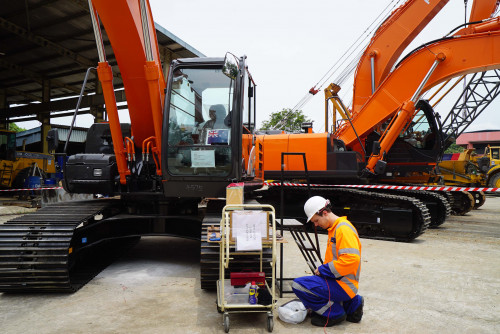 Levi, who says his favourite part of his job is the troubleshooting and problem-solving, was the perfect candidate for the competition that requires technicians to be tested on both their theory and practical skills. After winning the national competition against the other two top technicians in the country, Levi was off to Singapore to compete in the Asia-Pacific regional final.

After winning the Asia-Pacific regional final, then going on to finish second in the world final, Levi is proud of his efforts. “Getting as far as I did has definitely given me quite a bit of recognition within the company. If I ever decide to apply for a team leader or foreman role, the achievement will be a great thing to have on my CV.”“It’s basically a competition on everything you know,” says 31-year-old Levi. “First you do a theory test of about 50 questions, then you do a practical test.” The practical test gives contestants 75 minutes to find and fix three faults on the machine. “Once you’ve fixed everything, you have to prepare a report explaining what you found, what you did to repair it, and why – so it’s really a test of all of your skills.”

Levi’s successes were no surprise to CablePrice Wellington Workshop Foreman Warwick Bernon. “He’s a hard worker who can easily sort out any issue. He’s also a problem-solver which stood him in good stead in the competition.”

Levi, who has gained two heavy vehicle qualifications through MITO – one in Plant and Equipment and one in Road Transport – couldn’t be happier with the industry he’s in. “There’s no such thing as a typical day in this job,” he says. “One day you could be in the workshop working on new machines, the next you could be in the field somewhere you’ve never been before."

"That variety keeps every day interesting.”