MAN WITH A MANAGEMENT PLAN

From leaving school at 16 to being fast-tracked to a management role, Cody Struthers, a Mechanic at Motor Tech Ltd, has worked his way up the ladder on the strength of his own talent and hard work.

Graeme Key, Director at Motor Tech Ltd sees a bright future for Cody. “When I started here at Motor Tech Ltd I was brought in to be Workshop Manager, then became a shareholder and now I’m the owner. My aim is to bring Cody up through that same process. He's got the skills to be able to do it.” 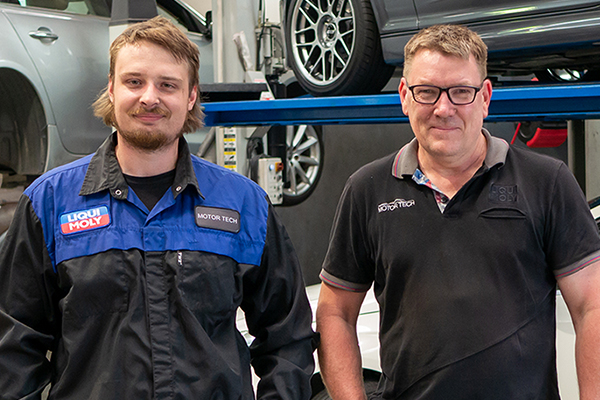 Already in training to transition to Workshop Manager, Cody always had ambitions to become a manager. “I just didn't think it would happen this early but it’s really good. I’m loving it!”

Time management has been one of the most useful skills learnt during his apprenticeship. “Knowing how to get the job done, how long it will take and being able to do it on time or faster.” Cody has always needed to juggle his time between work, family and tinkering on his own cars. With a daughter on the way, this skill will be more useful than ever.

The ability to work on his own cars in his spare time is another benefit. Cody now has his dream car, a Nissan C33 Laurel, but has been working on cars since he was 14. “I've probably had 50-plus cars and I've done little bits or big bits to all of them; head gaskets, motor swaps, clutches, the works really.”

“I always wanted to be a mechanic, I just didn't have the confidence to go out there and try and get a job,” says Cody. He spent time working at Repco before landing his first job. It was then that his confidence grew. “I actually had a lot more experience than I needed and jumped straight into it. I impressed everyone I worked for, then kept on going!”

Cody’s advice to others is: “Get into it as early as you can and get those skills while you're young. Knuckle down and get it done. Partying comes later.” Wise words from a man who’s been there.