For as long as he can remember, Liam Gardner has had a passion for all things automotive. So when it came to picking a career path, it was a no brainer – Liam wanted to work on cars. 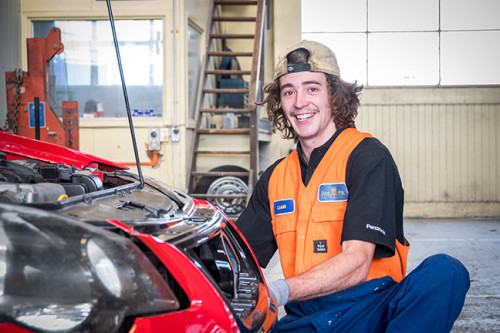 After completing a pre-trade course, Liam soon secured a job at Grant White Autobody Ltd in Hastings. Workshop Manager Andrew McNamara says Liam stood out from the get-go, as he took the initiative to come in to the workshop to introduce himself. “Instead of just phoning or emailing through his CV, he came in and spoke to us face-to-face. It sounds like a small thing but it made a big impression.”

That small move paid off for Liam, and he was immediately offered work experience, and soon after that, a full-time job. Now, he’s completing a New Zealand Certificate in Collision Repair (Non Structural Repair) (Level 3 and 4) through MITO.

Liam admits that when he first began his journey into the automotive industry, it was light vehicle mechanics that he was most interested in pursuing. Now, after over a year working at Grant White Autobody Ltd, and eight months into his apprenticeship, he’s loving the collision repair industry.

“Learning all the different techniques involved is really interesting,” says Liam, “and I’m always working on something different – it’s never boring.” For someone as car-mad as Liam, he can’t think of anything better than getting the chance to work on a huge variety of cars every day. “For me that’s definitely the best part of the job,” he says.

Earlier this year, Liam was a recipient of a MITO Kick Start Māori and Pasifika scholarship. The scholarship, which pays the first year fees for any MITO apprenticeship or traineeship programme at Level 4 or above, was the perfect start to Liam’s apprenticeship. “Having my fees covered in this first year is a huge help,” he says. “I was really stoked when I found out I’d been named as a recipient – and really surprised!”

It was Workshop Manager Andrew who initially suggested he apply for the scholarship. Upon hearing Liam had been successful, Andrew was over the moon. “He’s honest, reliable, a hard worker and just an all-round good kid – he definitely deserved it.”

Andrew also completed his apprenticeship through MITO while working at Grant White Autobody Ltd, so he understands the importance of earning a qualification, and how beneficial on-the-job training is. “We’re able to train our apprentices the way they need to be trained to handle real world situations, which is invaluable to us.” He also adds that due to skill shortages in the industry, it’s vital that businesses are bringing in apprentices to futureproof for the next generation.

Right now Liam’s main focus is getting qualified, but that doesn’t mean he’s not already thinking about his future goals. “I definitely think that management would be interesting to get into, and I’ve always thought about owning my own business one day too,” he says. “I just want to keep moving up, and be as successful as I can be in this awesome industry.”