On the Road to Success

Fresh out of school, Josh Mabey seriously considered a career as an Aircraft Technician in the armed forces. But a passion for driving, coupled with a strong family background in heavy machinery, saw him land a job as a driver for Allied Concrete - and he thinks he’s found his calling.

The rewards are definitely worth it and the qualifications can take you anywhere.

After a conversation with his Dad, who is the Driver Training Manager for HW Richardson, Josh decided to get his Class 2 L Licence (medium rigid vehicles) and has never looked back. “When the opportunity arose for me to get my licence, I didn’t take much convincing” he says. “When I was younger, I used to spend hours in the cabs of various trucks and tractors alongside my Grandfather.  So I’ve always had a strong interest in heavy machinery.”

But it was when Josh climbed into the cab as a licenced truck driver that things became clear. “The first time I sat in that driver’s seat, I knew I was doing what I wanted to do for the next 20 odd years. It just felt right.”

Josh joined Allied Concrete Palmerston North as a young driver cadet at just 18 years old. Since then he has gained his Class 4 Licence (heavy rigid vehicles), has moved from driving a HINO 500 Series Class 2 Mini Mixer to a much larger eight-wheel mixer and completed a National Certificate in Goods Service (Heavy Vehicle Driver) through MITO. “For me, getting a formal qualification felt like something I needed to do as it could really assist me in my future as a heavy machine operator,” says Josh. “The training programme was really great, and I loved that you could complete it on the job!” 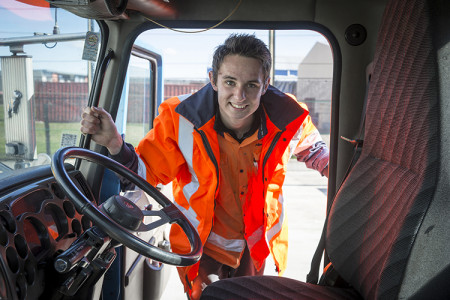 In an industry that is actively seeking to attract more young people, Josh is a success story. Plant Manager Bruce Pearson says “Josh has done incredibly well since coming on board. We initially employed him as our very first young driver cadet, and the programme proved so successful that once he gained his Class 4 License we decided to appoint a second young cadet.”

“It’s great to see younger people joining the industry and progressing through the ranks,” Bruce continues. “The fact that Josh is out there driving an eight wheel mixer at his age speaks for itself. It shows there is a great career pathway for school leavers. They have the opportunity to progress their careers in not only the Commercial Road Transport industry, but also in production or even management. Whatever pushes their buttons!”

“School leavers have the opportunity to progress their careers in not only the Commercial Road Transport industry, but also in production or even management.”

When asked what advice Josh might have for other young people thinking about a career in Commercial Road Transport, his response was to take it slowly. “You have to have some patience. You won’t be able to just start driving big rigs from the get go - you’ll have to focus and work your way up. There’s a lot to learn - but the rewards are definitely worth it and the qualifications can take you anywhere.”

Josh loves the variety of his job and the fact that no two days are the same. “I’m really enjoying myself at the moment and can see myself working with concrete trucks for the next few years at least. Then, eventually, I’d like to look at possibly getting qualified in Petroleum transportation or even logging.”

Whatever path he chooses, it’s all within reach of this accomplished individual. 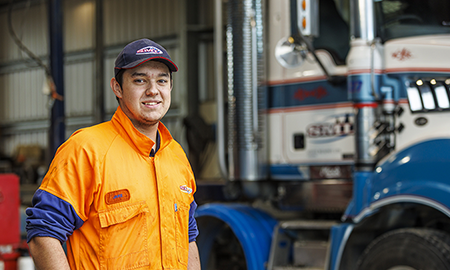