It's Never Too Late To Get Qualified

Jaxon Kuvarji was brought up around cars from a young age. He was a bright student, but instead of doing his homework, he’d often be found out in the shed helping his dad - working on cars, motorcycles and anything mechanical he could get his hands on. It’s something that came easily to him and something he found fascinating. So, it’s no surprise that a career in the automotive industry beckoned – and an extremely successful one at that.

After several roles in the industry, gaining a decade of valuable experience, Jaxon began at Auto Super Shoppe Mayne in May 2013. Now, an automotive technician, the 29-year-old has been awarded a 2017 MITO Business Skills Māori scholarship and is set to complete his National Certificate in Business (First Line Management) (Level 4) – a nine-month programme which offers a professional development opportunity for people aspiring to management excellence.

I’ve learned a great deal from the training programme so far and it’s really taught me how to look at the business from a different perspective which has been extremely beneficial.

“I was over the moon when I received this scholarship,” says Jaxon. “I put a lot of effort into my application so I was thrilled that it paid off. I’ve learned a great deal from the training programme so far and it’s really taught me how to look at the business from a different perspective which has been extremely beneficial. I’d like to progress to a Service Manager role in the near future and this qualification will give me the skills I need to progress my career.” 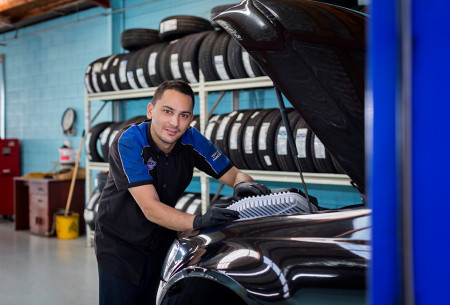 “I wanted to get qualified as I was getting a bit older,” says Jaxon, “and even though I had plenty of experience, I thought it would be beneficial for my career to have the qualifications behind me too – and be recognised for the skills and knowledge I have. To be honest, I regret not doing it sooner. If I had become qualified at 21 – who knows where I’d be now! But I guess on the other hand it just shows you that it’s never too late to get qualified either.”Jaxon is no stranger to furthering his knowledge in the industry. With the help of a Māori and Pasifika Trades Training (MPTT) scholarship – an initiative to support young Māori and Pasifika people to gain trade qualifications and employment – Jaxon completed a National Certificate in Automotive Engineering (Level 3) and a National Certificate in Motor Industry (Automotive Engineering) (Level 4). He is also currently studying towards a National Certificate in Motor Industry (Automotive Electrical Engineering) (Level 4).

With an impressive list of qualifications already, and more forthcoming, Jaxon isn’t done furthering his knowledge either. “I’d also really like to train to become a motorcycle technician too – so another qualification is almost certainly in the pipeline!”

Service Manager, Bryan Robinson, says “Jaxon’s an extremely motivated worker, with a great skill-set. He’s always keen on learning more and improving his abilities – as he has shown by the numerous qualifications and certificates he has achieved. Receiving a MITO scholarship was thoroughly well-deserved and will help him progress into a management role, which is ultimately where he’s heading.”

Even though he’s incredibly busy with his own career, Jaxon still manages to find time to help his dad out in the shed. “At the moment we’re restoring a Yamaha Virago motorcycle – my dad polishes it and I do all the work,” he laughs.