From a part time job sweeping workshop floors, to competing at the upcoming National WorldSkills NZ competition, apprentice automotive technician, Isaac Forrest, has come a long way in a short time. What originally began as an after-school job to earn some money, quickly developed into a very promising career that will see Isaac test his growing skill set against the best young people in the country.

I wanted to get qualified with a National Certificate so that I could work on more technical aspects of the job and progress my career even further.

Having made it through the regional WorldSkills competition, 20-year-old Isaac has been invited to compete at the national competition, to be held at Wintec from September 29 to October 2. He will compete in the Automotive Technology category alongside seven other MITO apprentices and graduates. Three MITO learners will also compete in the Automotive Refinishing category.

“I was delighted to be invited to compete at nationals,” says Isaac. The regionals gave me a better understanding of what I’m good at and the areas I need to focus and improve on. Now I’m just concentrating on preparing as much as possible!”

Isaac’s entry into the industry began with a part-time job at G Guy Motors in Thorndon, Wellington, while he was at school. “I wasn’t doing anything technical, just sweeping the floors and general tidying,” says Isaac. “But it was a great insight into the business and I soon realised that I enjoyed the environment and the type of work you would get to do as an automotive technician. I didn’t grow up knowing I wanted to work in the industry - but it quickly grew on me. Now I love it!” 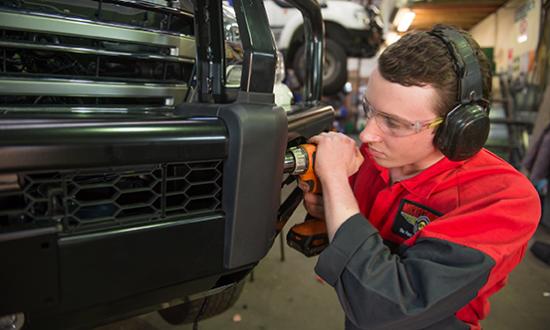 After his year at Weltec, he decided to enrol in a MITO apprenticeship which allowed him to earn more money and work full-time - while still training on the job. “Being able to earn and learn at the same time just seemed logical to me,” says Isaac. “I wanted to get qualified with a National Certificate so that I could work on more technical aspects of the job and progress my career even further.”After finishing school, Isaac continued to work part-time while enrolled in a pre-trade automotive course at Weltec, where he received a Youth Guarantee scholarship. At the end of an intensive first year, where he continued to further his skills and knowledge, he received an award recognising him as the most competent individual in the class.

The move paid off, and he was soon awarded a 2016 MITO Kick Start scholarship, contributing $1,000 towards the first year of study for any MITO apprenticeship or traineeship programme at Level 4 or above.

“I originally saw an ad in Radiator for the MITO scholarship programme and figured I had nothing to lose by applying. I was thrilled when I found out I had received a Kick Start scholarship,” says Isaac.

Recognising the scholarship as motivation to succeed further still, Isaac continues to push himself. “Since being awarded the scholarship, I feel like it is really driving me forward and I want to prove to myself that I deserve it with the work I am doing.”

It’s a quality that G Guy Motors business owner Grant Guy sees in Isaac day to day. “He’s a very motivated individual. He works hard and turns up ready to tackle everything we throw at him. It really is quite an impressive start to his career and we’re very proud of how much he’s accomplished already. He’s a real asset to the business.”

When asked what future aspirations he holds for his career, Isaac has a pretty straightforward response. “To be honest, I just want to be really good at what I do and to one day make a name for myself in the industry.”

With all that he has achieved to date, it seems Isaac is well on his way to accomplishing just that.