For Hamilton’s David Fox a career in the automotive industry was always a very likely scenario.

Both his father and step father have an interest in restoring old cars, and David joined them whenever he could - so a love of cars was forged.

After leaving Morrinsville College as a 16 year old, David did a pre-trade course at Wintec with work experience, and was offered an apprenticeship through MITO at Wade Collision Repairs in Hamilton. Five years on, David, a Collision Repair Technician, has one final practical assessment to do, and he’ll have completed the National Certificate in Motor Industry (Automotive Body) (Levels 3 and 4). 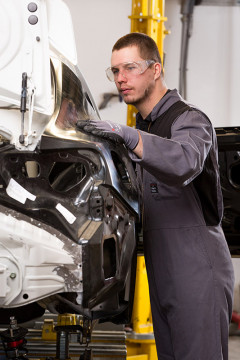 David thoroughly enjoys his role and the challenges of collision repair, particularly as no two repairs are the same. “I love that every job is different, I have to think about what I’m doing so there’s always a challenge, which means I’m always learning, it’s great!” said David.

“I’m really looking forward to the competition. It’s amazing to be in the team and representing New Zealand in Brazil,” said David. He’s taking his selection very seriously, working with a skills expert and to a specific training programme that involves a combination of practical work and study each day. “I’m focused on my training and my goal is to be on the podium in Brazil,” said David.The 22 year old is proving to be highly skilled at collision repair. In 2012 he came second in the Autobody Repair section at the WorldSkills national competition – WorldSkills is a global event that brings young people together to compete in their respective trade. He went one step better at last year’s nationals, taking home the gold medal, and followed that up with gold at the Oceania round. In May, he was named as one of 15 tradespeople in the New Zealand team, the “Tool Blacks”, and in August will travel to Sao Paolo, Brazil to compete in the WorldSkills International competition.

“It’s fantastic that David is in this team, not just for him and our company, but for the industry too.  It shows there are people in the industry who are focused and doing well at their jobs,” said Paul Beale, Operations Manager at Wade Collision Repair. “David is definitely a role model for other young people looking at apprenticeships,” he added.

David is very happy with his chosen career and the opportunities it has given him. As for the future, apart from a medal in Brazil, he’d like to gain more qualifications and eventually be able to undertake workshop estimating and management.

In his spare time you’ll find him fishing, riding motorbikes or restoring his Datsun. But for now the trusty Datsun will have to wait, as he spends all his spare time preparing to compete against the world’s best in autobody repair, in Brazil. 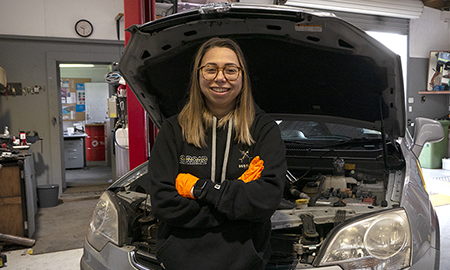