Soon after beginning a building apprenticeship, Dylan McGinnity quickly realised that the construction industry just wasn’t for him. He’d been into cars for as long as he could remember and decided a career in the automotive industry would make perfect sense.

Now, 24-year-old Dylan is completing a New Zealand Certificate in Collision Repair (Non-Structural Repair) at Ashton Panel and Paint, Lower Hutt, and has no regrets about his change of career.

Originally starting with the business as a car groomer, Dylan was enthusiastic about a career from day one. “In my interview my manager Corey asked if I had any ambitions of going further in the industry,” Dylan explains. “I told him I absolutely did.” After six months as a car groomer, Dylan was offered a collision repair apprenticeship, and hasn’t looked back since. 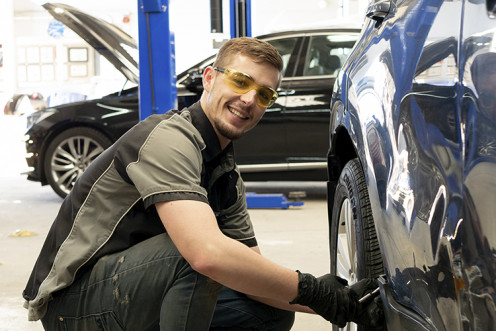 Dylan McGinnity, IAG Top Apprentice of the Year in Collision Repair for 2019

A big part of why Dylan enjoys his job so much is because he already had a passion for cars before he started. “My friends and I have always worked on our cars in our spare time,” he says. “So being able to do that every day – and get paid for it – is great!”

Dylan emphasises the importance of having a passion for your work, and the difference it can make when you truly love what you do. “I was never into studying when I was at school,” Dylan admits. “Learning on-the-job is completely different though, and I really like it. You’re doing eLearning theory, learning new things every day – it really makes the days go faster and you’re never bored.”

In 2018, Dylan was selected for the IAG Trades Scholarship programme. The programme, supported by MITO, aims to boost talent and strengthen the skill base of key industries by supporting a number of new apprentices through their apprenticeship.

“During the course of my apprenticeship I’ve really tried to smash out my theory work and keep ahead of my schedule wherever possible,” says Dylan. This year, his hard work and dedication paid off when he was named the 2019 IAG Top Apprentice of the Year in Collision Repair.

“I was shocked when I found out I had won; I really had a no idea it was coming!” laughs Dylan. “But I was stoked to win, the recognition of my hard work was great, and I also received a $1500 dustless sander from Wyatt Machine Tools which will definitely come in handy.”

John O’Rourke, IAG Motor Assessing Performance Manager, says Dylan is a model apprentice who has shown great commitment to his work and the trade. “The judges were incredibly impressed with Dylan’s drive, as well as the growth that he has shown as a technician throughout his apprenticeship so far – he is definitely well-deserving of this award.”

Ashton Panel and Paint Managing Director Corey McLaughlan can’t speak highly enough of Dylan and wasn’t surprised at all that he was named Apprentice of the Year. “If you met Dylan in person, you’d understand why he was chosen,” says Corey. “As soon as I met him for the first time, I knew I had to employ him.”

Corey describes Dylan as a diligent worker with a fantastic work ethic and a keen desire to learn and has no doubt that this is just the start of a successful career in the industry. “I suspect this is the first of many awards Dylan is going to receive over his career – he’s well-deserving.”