Breaking the bias one car at a time

Holly Benge is a 21-year-old female making her way in the automotive world and is not letting anyone stop her. She is currently completing MITO’s New Zealand Certificate in Collision Repair Non-structural Repair while working at Heretaunga Collision Repair in Wellington. Her journey into the automotive industry wasn’t always easy, but with the right mindset and attitude she has come out on top.

Holly always knew that being in the automotive industry was her goal, “I’ve always been into cars and grew up around them, so when I was able to get a job, I wanted to become a mechanic.” Another inspiration for Holly was her mum, “My mum worked on cars when I was, younger, so she is sort of a mechanic herself.” Holly’s employer David Patchett also noticed Holly and her mum’s passion for cars, “Holly’s mum always wanted to be a mechanic, but she was told by her parents that it wasn’t acceptable to do that as a job and as a career. The automotive industry and cars are something they are both really interested in, they are very automotive focused.”

Holly’s acceptance into the mechanics side of the industry didn’t go as planned, so had to change avenues. “When I began looking at getting into the automotive industry, I was turned away from quite a few workshops because I was a female. So I decided to give panel beating a go instead.”

Holly started at Heretaunga Collision Repair through her school Gateway programme. “As my family had been taking our car to Heretaunga Collision Repair, I was aware of who the owner was. I suggested this workshop to my school and that I wanted to work there, they were able to arrange a work experience placement for me one day a week. The course went for six weeks, and it ended at the school holidays. My boss asked me if I wanted to trial working at the workshop one week during the holidays, and after that week, they offered me an apprenticeship!” 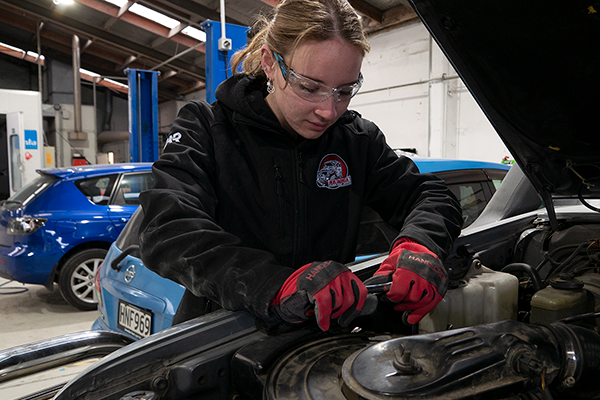 Holly has about one year left of her apprenticeship and as to how she is getting on, her employer David says she is star quality. “Holly has been doing well in her apprenticeship so far. She is very focused and balances her commitments well. Her focus on detail is exceptional.”

Holly is doing so well that she is soon to be promoted and stepping into the shoes of their senior panel beater. “I have a senior who is now only working three days a week, so after Holly has finished her welding certificate she is stepping into his shoes. I definitely see her progressing into a lead repair role, sooner rather than later.”

Holly is one of the first female employees Heretaunga Collision Repair have had, and David says she is setting a great example for other females in the industry and in their team. “When we employed Holly, as a female one of the things we were concerned about was her strength and how she would keep up with the physicality of the job. However, that has never been an issue for Holly. She has set a great example while being in the workshop.”

David also has two other female learners from the local polytechnic coming into the workshop a couple of days a week. One wants to be a panel beater and one wants to be a painter. Because of Holly and her great work, David’s initial hesitation of having females working in the workshop has subsided. “If you look at the refinishing area of the business, females are more focused on the details. Holly grooms and preps our vehicles and just does it better. Her detail to those areas never fails. I have never had a customer concerned with the grooming of their vehicle once Holly has completed the job.”

As to whether David would take on another female apprentice he says “Absolutely. I have no hesitation. If they can do the job, why not. The industry is in need of new apprentices, it is mission critical. If you do not make the effort to develop people and keep them in the industry they will go elsewhere.”

Being a female in the industry shouldn’t hold you back, and Holly is demonstrating that she can do the job just as well or even better than her male counterparts. Holly’s advice for other females and people looking to get into the automotive industry, just do it. “Don’t let a couple of workshops or people knock you back. If it is something that you really want to do keep at it, because there will be someone that will give you a chance, and all you need is that one person.”