Multiple Apprentice of the Year Awards

Automotive Technician Ben Fretwell has been rewarded for his hard work and dedication to his career after receiving the Snap-on Tools Apprentice of the Year award — the first New Zealander to do so in the award’s seven year history.

To be named as Apprentice of the Year was simply amazing.

More than 300 entries were received from across Australia and New Zealand with apprentices representing the marine, aviation, heavy vehicle and automotive trades. Ben was the sole New Zealander named in a shortlist of 20 finalists and received the award after providing an impressive submission to the panel of industry heavyweights, and following intensive reference checks with his teachers and workplace. 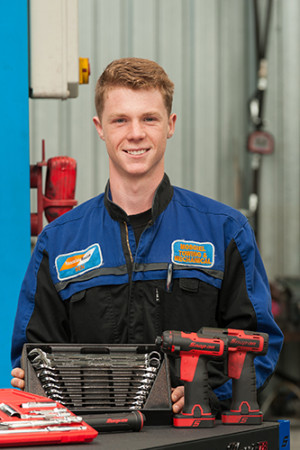 Ben Fretwell, Apprentice of the Year

Rewarded with a prize package that included over $12,500 worth of products, the Mosgiel Towing & Mechanical apprentice said the award was completely unexpected. “I was honoured just to have been selected as a finalist, and to be honest, that alone would have been great recognition for me. But to be named as Apprentice of the Year was simply amazing,” says Ben.

The award caps a substantial year of highlights for Ben after he was also named the Otago MTA Apprentice of the Year. “I worked hard but didn’t really rate my chances due to the high calibre of the other MTA apprentices nominated. They were all extremely competent and experienced, so when they read out my name I was really surprised.”

Ben’s supervisor and business owner, Tony Fox, says “I’m awfully proud of Ben for receiving these awards. It is a real acknowledgement of the commitment and effort he continues to put in towards both his work and training for his apprenticeship.”

Always wanting to know more about his trade, Ben is completing a National Certificate in Automotive Electrical and Mechanical Engineering (Light Vehicle) (Level 4) through MITO. “He’ll receive his practical assessments and a couple of days later he’s sending them in for marking,” says Tony. “He’s remarkably motivated!"

Ben’s driven attitude can be attributed to his love of learning. “I’m always wanting to know more,” he says. “I really enjoy the theory side of my job and applying what I learn in the training programmes to the vehicles I am diagnosing in the workshop makes the job that much easier!”

Understanding the technologies and principles behind everything in the vehicle is a part of the job that he relishes. “Ben’s very interested in diagnostic work and when a job comes in he’s really eager to use the scan tool and get to the bottom of what the problem is,” says Tony. “If it’s not straightforward, he’ll take the initiative to research the fault codes online — often in his own time — and comes back with different solutions.”

“It’s definitely an area I’d like to concentrate on in the future,” says Ben. “Once I’ve completed this qualification, I’d really like to do MITO’s Advanced Technical programme.”

It appears an already impressive CV looks set to become an even more impressive career.