Mason Robbie never doubted what he wanted to do as a career. His only task was finding out how to make it happen. Having grown up around cars his whole life, and with a family who are car-mad, the automotive industry beckoned. Now, the 17-year-old apprentice automotive technician is completing a New Zealand Certificate in Automotive Engineering (Level 3 and 4) through MITO at Hutt Automatics, Lower Hutt.

With his mind made up, Mason’s journey into the industry started while he was at school. Given his passion for cars, he enrolled in an automotive gateway programme and spent one day a week at Hutt Automatics learning as much as he possibly could. More than convinced it was what he wanted to do as a career, he left school at the end of 2017 and began his apprenticeship. 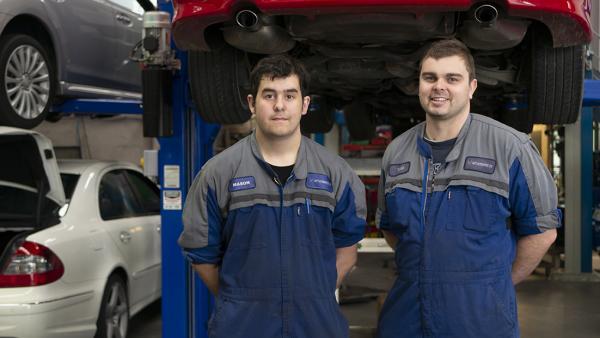 Mason, who is six months into his apprenticeship, says the MITO training programme is helping him to learn faster and likes how he can apply what he’s learning to his day to day activities. He’s also relishing the eLearning element of the programme. “The eLearning’s great and really easy,” says Mason. “I can access heaps of resources like videos and interactive simulations, or complete theory elements of the programme on my phone whenever or wherever I want.”“I always knew I wanted to be a mechanic and the gateway programme just reiterated that desire,” says Mason. “It really helped me to learn more about the job, the industry and also get a feel for what it would be like to do an apprenticeship.”

Mason’s supervisor Tom Craig says, “Mason has improved really quickly since he first started with us. He’s a hard-working and reliable member of our team who shows great initiative. Even though he’s only at the start of his apprenticeship, we’re giving him some pretty technical stuff to work on and he’s building his skills more and more which is great to see.”

Mason, who is of Ngati Porou descent, was also one of MITO’s 2018 Kick Start Māori scholarship recipients – which contributes $1,000 towards the fees for his apprenticeship. Plus, as Mason was eligible for two years of free fees for industry training through the government, the scholarship is transferred to the third year of his training programme, meaning the annual training fees for Mason’s entire apprenticeship may be fully funded.

“Receiving the scholarship was a complete surprise,” says Mason, “but it will really help me out financially and make it that much easier for me to achieve my dream of becoming a fully qualified automotive technician.”

“It’s absolutely brilliant that he was one of MITO’s scholarship recipients,” says Tom. “It couldn’t have happened to a nicer person who needs it - and who deserves it - as much as Mason. We are all really proud of him.”

With a long history of training apprentices through MITO, Tom says it makes perfect sense for Hutt Automatics to hire young people looking for a rewarding career. “As automatic transmission specialists, we find hiring young people who are new to the industry, and training them from the start, works really well for us. We’re really keen to encourage the next generation to join us. It’s a win-win.”

And with colleagues who have either already completed, or who are nearing completion of their own qualifications, Mason has an abundance of knowledge to draw on and several mentors around him who are all willing to help him achieve his goal. “I work with a great team,” says Mason, “and it’s just another reason why I love this industry.”