Apprentice of the Year’s Admirable Ambition

“I had to pinch myself a little,” laughs William Patten of Waitemata Panelbeaters, Auckland, when describing his shock at being named the IAG Top Apprentice of the Year in Refinishing for 2016. “It was surreal to receive the award and I’m still at a loss for words!”

The judges listed his motivation, initiative and strong ambition as particular attributes of note befitting an apprentice of the year. They’re sentiments shared by his supervisor, Alf Woodcock. “William’s a hard worker and is very dedicated. This award is a fantastic achievement for him and we are all very proud.”

I'm really enjoying the training programme - it really makes you think! And while it can be challenging at times, my MITO Industry Training Advisor is always there whenever I need any help.

The IAG Trades scholarship programme, supported by MITO, aims to boost talent and strengthen the skill base of key industries by supporting a number of new apprentices through their apprenticeship. William was selected from the 2015 intake of scholarship apprentices and took home a top of the line Orbital Sander worth $1500 courtesy of Wyatt Machine Tools. 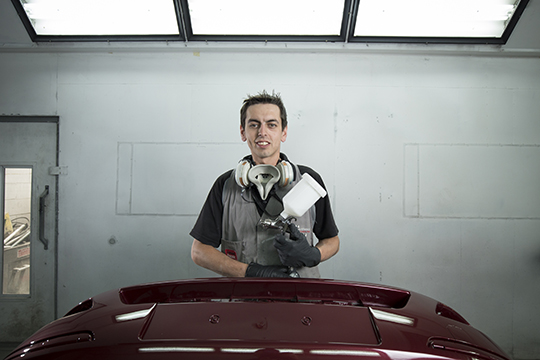 William Patten, IAG Top Apprentice of the Year in Refinishing for 2016

The 23-year-old MITO learner has been keen on cars since he was young. But it was when he worked for Majestic Horse Floats that refinishing really sparked his interest. “That job involved a bit of everything – replacing panels, sandblasting, helping to extend chassis on trucks and, of course, painting,” says William. “That was the part of the job that I particularly enjoyed and I thought it was something I could investigate further.”

Now he’s completing a National Certificate in Motor Industry (Automotive Body) (Levels 3 and 4) with strand in Refinishing, and “really enjoying” the training programme. “It really makes you think,” says William, “and while it can be challenging at times, my MITO Industry Training Advisor is always there whenever I need any help.”

Once his apprenticeship is complete, William wants to continue to progress his career and become qualified in Collision Repair – another indication of his admirable ambition. “I’ve always thought I’d like to have qualifications in both disciplines so that I have a well-rounded knowledge of the industry,” he says. “Then, after that, I’ll potentially look at moving into a management role.”William gets a lot of satisfaction from his job – particularly when returning a vehicle to its original state. “A job will come in all smashed up but leaves the shop looking like it has rolled off the factory floor,” says William. “Knowing you made that happen is a great feeling.”

William acknowledges part of his ambition can be attributed to the support he’s received from his supervisor – and is one of the reasons for his recent success. “Alf is always there to support me and I’d like to thank him for being behind me all the way. He pushes me and without that, I wouldn’t be where I am today.”

In his spare time, you’ll find William at Waikaraka Park Speedway, Auckland, fixing his friend’s stock car. “We also travel round the North Island when racing and time allow. It takes up most of my spare time – that and my study,” he laughs.

Ever since Seb Frances began his light vehicle apprenticeship through MITO, his career goal was clear: he wanted to be known as the ‘EV guy’.

Having struggled with dyslexia his whole life, Cole was apprehensive about starting an apprenticeship. Now, with the support of his employer and MITO, he's loving learning a trade.