APPRENTICE OF THE YEAR MAKES HIS FAMILY PROUD

The CRA Apprentice of the Year – Golden Gun is awarded to the country’s most outstanding apprentice in automotive refinishing. This year’s recipient was 23-year-old Utah Tane. Currently working as an automotive refinisher at Rod Wood Collision Repair Centre Ltd, Hamilton, Utah is the perfect example of how hard work and dedication to the trade can pay off.

At 15-years of age, Utah left school and began full-time work in an effort to support his young family. “It felt like something I needed to do as the man of the house,” he explains. “I wanted to step up, get a proper job, and support my family.” He initially began working as a labourer for a truck painting business, learning the ropes and helping out wherever he was needed. After a few years labouring, Utah heard of an opportunity at Rod Wood Collision Repair Centre Ltd, Hamilton, and set his sights on completing a refinishing apprenticeship. 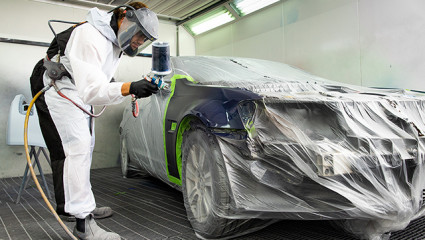 “I think everyone would like to be qualified in their field – it’s nice to have something to show for your work” says Utah. “So as soon as I got the job at Rod Wood I let them know that I was keen to do an apprenticeship and get qualified.”

Utah exceeded expectations when he went on to complete his New Zealand Certificate in Automotive Refinishing (Level 3 and 4) through MITO, in just 16 months. Motivated by his partner, who was also studying, Utah would spend his evenings with her at the university library, completing his eLearning theory.

Rod Wood Director Simon Hussey was impressed with how quickly Utah worked through his programme but wasn’t surprised. “When I first hired Utah I just had a gut feeling that he was a young fella that really wanted to go places,” he says. “He’s always had this keenness to succeed, which I really like about him. You give him a task and you know he’s going to complete it well – he’s fantastic.”

With a work ethic that impressive, it’s no wonder Utah was named this year’s CRA Apprentice of the Year – Golden Gun recipient. “When the judges told me I had won, I didn’t know what to say – I think I was in a bit of shock,” he says.

“I was absolutely chuffed for Utah when I found out he had won. To be noticed in the industry for all his hard work, that’s fantastic,” says Simon. “He’s a really humble guy, and I don’t really think he knew what to say when he found out, but I know it means a lot to him because of his family.”

Utah, who is the first in his family to get qualified, says his they were hugely proud of his accomplishments. “It was a really big deal for my family,” he explains. “We don’t usually receive awards or anything like that.” The recognition from his industry is a huge confidence boost also, he says. “It made me realise I can really go somewhere with what I’m doing.”

The exciting thing about the industry, Utah says, is that there are so many possible avenues to go down. He’s interested in the possibility of extending his skills to cover custom colours, lacing, air brushing, and even collision repair. “I’m looking into the panel beating side of the industry too,” he says. “I never want to be bored in my job, so I’m always keen to learn new skills. I can’t wait to learn more and better myself as a tradesman.”