Annelise Ruffell left high school unsure of what her next step should be. She considered a career in retail or office work, then eventually followed the lead of her friends and enrolled in a beauty therapy course. 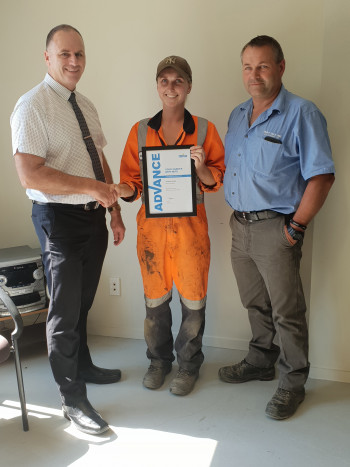 Since beginning her apprenticeship five months ago at Heavy Trax Hire in Cromwell, Annelise has never doubted her decision to leave the beauty industry behind. “I found beauty therapy interesting,” she says, “but what I do now is so much better.”

While she had never entertained the idea of a career in the industry, it’s not surprising that this is where she’s ended up. “When I was younger my Dad would always buy old cars and strip them down then rebuild them, so I was always in the garage with him doing that,” she says. “I’ve always been around heavy machinery too – lots of my family drive it or fix it, so I’ve grown up around it.”Obviously loving learning a trade, Annelise doesn’t hesitate when asked what her favourite part of her job is: “The diversity. One day I’ll be working on a truck and the next day it will be a 30 tonne digger. It keeps it interesting, that’s for sure!”

Despite growing up around machinery and mechanics, Annelise admits that she did have reservations about working in what she perceived as a ‘male-dominated’ industry. However, since starting at Heavy Trax Hire, she’s realised there was no need to worry. “All of the men I’ve met are really encouraging and supportive of women getting in to the industry, which is awesome to see.”

Annelise was a recipient of a 2019 MITO Kick Start scholarship, which pays the first year fees of any MITO apprenticeship or traineeship programme at Level 4 or above. “Having my first year of fees paid really takes the pressure off both me and my employer,” she says. “It also gives me a great sense of achievement, and that extra push to succeed.”

It was Graeme Pollard – Annelise’s supervisor and Workshop Foreman – who pushed Annelise to apply for the scholarship. “She’s a really fantastic team member,” he says. “Every job she does, she works to do better than the last one.”

Graeme is particularly impressed with Annelise’s work ethic. “She’s come a long way in a short time – she’s definitely got the drive to be very successful in this industry.”

For others interested in entering the heavy automotive industry, Annelise has some simple advice: “You’ve just got to get out there and give it a go. Get that qualification and start your career.”