ALL THE WAY TO THE TOP

Tony Hamelmann’s ambition is impressive. The automotive technician at Giltrap Audi, Auckland, doesn’t hesitate when asked where he hopes his career in the industry will take him. “All the way to the top!” says Tony. It’s an aspirational attitude and one that no doubt contributed to his naming as the MTA Light Vehicle Apprentice of the Year at the MTA Northern Region Awards.

Perhaps also an indication of the high regard in which he is held, Tony didn’t actually know he had been nominated for the award. “That was all my MITO Industry Training Advisor’s doing,” says Tony. “I didn’t quite believe it when I got the call congratulating me – I thought someone was having a laugh! It was a complete surprise but I’m chuffed that I won. This award will definitely add to my value as an employee going forward.” 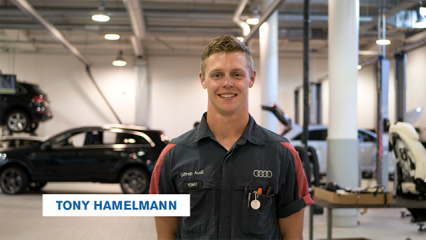 "Working on high-end cars with the latest technology - that are often worth hundreds of thousands of dollars - is amazing. Who doesn’t want to drive 400kW Audis every day!"

Tony’s supervisor, Fraser MacRae, is already well aware of the value he brings to the team at Giltrap Audi. “Tony is extremely hard working and always eager to help out and do any work required. Out of all our apprentices he was definitely the most enthusiastic – he’s passionate about his trade, his career, and the job he does. He does quality work but is always trying to better himself and do things to the best of his ability. He’s going to go a long way in this industry and this award is only an indication of things to come.”

With a dad “massively into cars – from motorbikes to rally cars”, Tony admits he didn’t have much choice when it came to his own interest in cars. So, when it came to choosing a career path, Tony thought doing something he enjoyed made a lot of sense. Now, the 21-year-old has completed a National Certificate in Motor Industry (Automotive Electrical and Mechanical Engineering) with strand in Light Vehicle (Level 3 and 4) through MITO, in just two and a half years – a phenomenal achievement.

“My goal was always to complete my apprenticeship in under three years,” says Tony. “I’m finally a qualified automotive technician which is a great accomplishment for me. I owe a huge thanks to my Service Manager and my MITO Industry Training Advisor - it’s pretty much because of them and their help and support that I have completed my qualification so quickly.”

Tony thoroughly enjoys his job and says the workshop atmosphere has a lot to do with it. “The working environment here at Giltrap Audi is amazing. The way you get treated as an employee is second to none. They really look after you. Plus, working on high-end cars with the latest technology - that are often worth hundreds of thousands of dollars - is amazing too. Who doesn’t want to drive 400kW Audis every day! It’s just another reason why I love working here.”

Looking to the future, Tony is set to complete more qualifications through their in-house training model and hopes to one day progress his career to Foreman, Service Manager and even General Manager. “Becoming an Audi Master Technician is a goal that has already been set for me by my Service Manager. One of the other technicians here in the workshop took five years to complete it so I’m aiming to do it in two,” he laughs.

Just another example of this Apprentice of the Year’s impressive ambition.