MITO apprentice Alex Banks discovered her passion for refinishing at only 15 years of age while completing an automotive taster course during her schooling in Australia. “The course covered lots of different areas but I completely fell in love with refinishing and wanted to make a career out of it!” says Alex. Full of motivation, she left school shortly afterwards and enrolled in a year long pre-apprenticeship course.

In 2013, she made the move to New Zealand but struggled to find a job in the refinishing industry. “I gave up on refinishing for a while because I was having so much trouble finding work. To be honest, not many people wanted to take on a young girl,” says Alex. Still wanting to use her creativity, she completed polytechnic courses in both make-up and special effects make-up but couldn’t ignore her dream of becoming a refinisher and decided to persist in her search for employment.

I just love being in the workshop – transforming a damaged car to look brand new again is extremely satisfying.

Alex is currently an Apprentice Automotive Refinisher at Stokes Valley Collision Repair Centre and it’s clear that it’s the job for her. Having recently enrolled in the New Zealand Certificate in Collision Repair and Automotive Refinishing (Level 3) eLearning programme through MITO, she grasps every opportunity she can. “I just love being in the workshop – transforming a damaged car to look brand new again is extremely satisfying. My favourite part is being in the booth painting, but I actually really enjoy cleaning the cars too. If I wasn’t a painter, I’d probably be a car groomer!” laughs Alex. 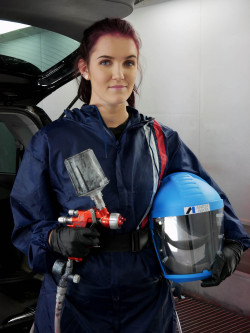 With an impressive career himself, Drew is a great mentor to Alex. Having been to the 2011 WorldSkills competition in London, where he gained a Medallion of Excellence, he went on to be a judge at the 2012 National WorldSkills competition and helped to train New Zealand’s 2013 WorldSkills team. Drew’s confident that Alex will not only succeed at the upcoming competition, but in her career too. “Alex is extremely hard-working and committed,” says Drew. “She’s at work early every morning with a great attitude, which is why she’s achieved so much in such a short amount of time. A first-year apprentice, painting in the booth every week, is pretty amazing - she’s really excelling in her work.”Now 21 years old, Alex’s perseverance to find a job in the industry has already paid off. She says it was her supervisor, Drew Avery, who suggested she enter WorldSkills - a global event that brings young people from 77 countries together to compete in their respective trade. “Drew told me about WorldSkills and was confident that I would do well, so, I went along to the first round. I ended up winning a gold medal which I didn’t expect at all. In addition, I qualified for the Oceania competition in Melbourne and WorldSkills International in Abu Dhabi - so it turns out that Drew was right!”

While Alex is looking forward to competing, she’s aware that it will be a challenge. “I’m really excited to see how skilled the other competitors are but I know it’ll be tough.” Nevertheless, her comprehensive training will undoubtedly prepare her well and MITO’s sponsorship will provide valuable financial assistance.

Despite having limited spare time due to competition preparation and completing her MITO training programme, Alex hasn’t stopped thinking about her future. “I’d love to get into airbrushing one day. It looks like such a challenge and it would be amazing to master it, but my long-term dream is to own a workshop so I’ve got to get qualified first.”

It’s obvious that Alex is an apprentice to watch and her experiences at WorldSkills International in Abu Dhabi will certainly be something to look out for!