ABNER’S GOT THE GOLDEN GOODS

Abner Apineru is flying high after being named the 2017 CRA Apprentice of the Year – Golden Hammer. Held in high regard within the industry, the award is presented to the most outstanding apprentice in collision repair. Abner’s great attitude, humble willingness to always help others and excellent work ethic were noted as particularly commendable traits with the judges – making him the obvious choice for this award.

“I felt incredibly fortunate just to have been nominated for the Golden Hammer award,” says 30-year-old Abner. “But when I found out I had actually won I was beyond happy. My smile stretched from ear to ear and I couldn’t wait to go home and share the news with my family. Being recognised with this award is a real honour for me and I feel extremely proud.” 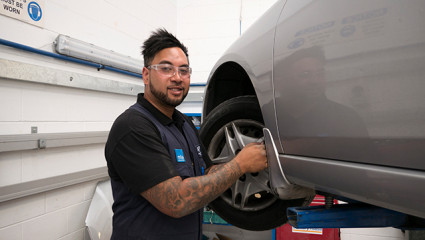 "I want to be a role model for other young Pasifika people and show them that they too can gain a qualification and have a career they love."

Described by his colleagues as the “nicest guy you’ll ever meet”, Abner’s friendliness and positive attitude compliment his ever-increasing skill-set. His supervisor, Derek Perkins, says “I am thoroughly proud of Abner – he really deserves this Apprentice of the Year award and I know his family were especially delighted for him too. Abner has the goods - he applies himself to every challenging situation and his dedication to his craft, along with his determined focus, are contributing factors to his success. He is very much an asset to our business and the industry.”

With an interest in cars since a young age and wanting a job that would allow him to be active and use his hands, Abner says he knew that collision repair was the career for him ever since he started his apprenticeship in 2014. “I wake up happy every morning and look forward to coming to work and getting stuck in to my job. I especially get excited about working on the latest model cars as I keep on learning new things due to the constant change in technology. This really is the type of career where you get to use your hands and your knowledge - I love it!”

Abner has shown a real aptitude for collision repair. His success in the industry is further evidenced by previously receiving both an IAG scholarship and the 2017 MTA Apprentice of the Year award. “Getting qualified through MITO was a massive achievement for me too,” says Abner. “I couldn’t have achieved all of this without the support of Auckland Panel & Paint, MITO, and my family and friends who have always been my support base. They’ve all been there for me since day one and I’m extremely grateful for all their help. Now I’m looking forward to continuing to showcase my full range of skills and abilities in my career.”

Always thinking of how to help others, Abner wants to use his own success as a way of encouraging other Pasifika people into the industry. “That’s one of my main goals going forward,” says Abner. “I want to be a role model for them and show them that they too can gain a qualification and have a career they love. I want to support them to dream big and just go for it. I never dreamed I would be where I am now but I believed in myself, worked hard and am proud of what I’ve achieved. Hopefully my story can inspire others to do it too.”