Twenty-four year old Jason Helmbright’s career is going great guns after recently being awarded the 2016 CRA Apprentice of the Year - Golden Gun at the Collision Repair Association’s annual conference in Melbourne. Held in high regard within the industry, the award is presented to the most outstanding apprentice in automotive refinishing. 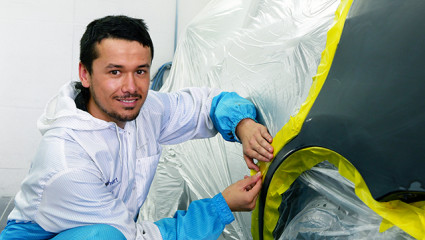 "There’s always something new to learn in this industry, so I’m always trying to grow my abilities and become more and more competent."

The apprentice automotive refinisher from Peter Long Collision Repairs, Palmerston North, was an obvious choice for the award, with his great communication skills and extreme competence listed as qualities of particular note by the judges.

Business owner Peter Long, is absolutely rapt too. “Jason’s a conscientious worker who is always keen to try new things and give everything a go. He’s a tremendous team player and just an all-round great guy. I’m thrilled that he’s received this award – it’s a wonderful opportunity for him!”“I originally decided to apply for the Golden Gun award because I used to work with a previous recipient of the Golden Hammer,” says Jason, “so I knew the hype surrounding these awards and how much of a big deal it is to win. I met the criteria to enter so I thought - you have to be in to win! It was amazing to find out I had actually won. It’s still very surreal but I’m incredibly happy and proud.”

With an interest in cars from a young age, Jason knew that a career in the automotive industry was for him. Armed with this passion, three years ago, he walked in to Peter Long Collision Repairs and asked for a job sweeping the floors. Starting in the prep bay, preparing vehicles for their repairs, he soon proved he was ready for an apprenticeship.

I always enjoyed art at school and being a creative person, automotive refinishing was the perfect fit for me,” says Jason. “I really enjoy working on cars and seeing my hard work shine through in the end result. But perhaps more importantly, I like learning, getting better and honing my skills - that’s probably the most satisfying part of the job for me. There’s always something new to learn in this industry, so I’m always trying to grow my abilities and become more and more competent.”

Recently, Jason truly proved that competence when he was thrown into the deep end when the other refinishers in the shop were absent. Jason painted a staggering 17 jobs in just one week – all to an experienced refinisher’s standard. “He demonstrates a real hunger for work,” says Peter, “and isn’t afraid of asking for advice when needed. You really couldn’t ask for more.”

Jason is well on track to complete MITO’s National Certificate in Automotive Body (Level 3 and 4) with strand in refinishing this year and is looking forward to being a fully qualified refinisher. “Getting qualified proves you are experienced and capable within the industry,” says Jason. “Having that qualification, along with the Golden Gun award, will be a great recognition of my skills and knowledge of the trade.”

With further experience, Jason is aiming to move into a leadership role in the future. “Once qualified, I’d like to complete a management training programme to gain a different perspective of the business and industry.”

But for now, he hopes he can be a role model, encouraging others to enter the industry; as well as proving that if you work hard, and find a career that you are truly passionate about, it’s a golden opportunity for success.