Andrea Thompson doesn’t believe that the automotive refinishing industry is as male-dominated as people may think. In fact, she says, she is constantly seeing more and more women entering the industry – something that she thinks is “awesome”. 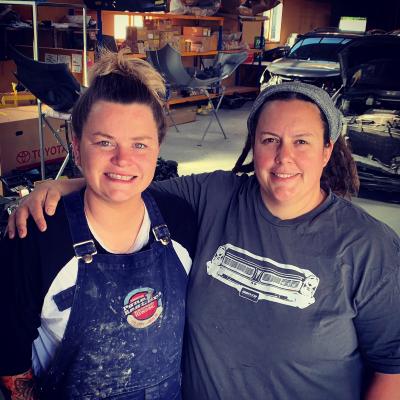 “In my role as a labourer, I was doing everything but the painting,” she laughs. “So once I was signed up as an apprentice I couldn’t wait to get into the booth – and now I’m in there three to four times a day!” Despite never having much of an interest in cars, Andrea finds it hard to pinpoint a part of her job that she doesn’t love. “Every day is different and there’s so much to learn – there’s honestly not one part of it that I find boring.”Currently working towards a New Zealand Certificate in Automotive Refinishing (Level 4) through MITO, Andrea is loving learning a trade, and is forever grateful that she “fell into” her apprenticeship at Queenstown Panelbeaters.  Starting as a general labourer in the workshop, Andrea quickly realised that she had found her calling, and decided to get qualified.

This year, Andrea was named the 2018 IAG Top Apprentice of the Year in Refinishing. The IAG Trades Scholarship programme, supported by MITO, aims to boost talent and strengthen the skill base of key industries by supporting a number of new apprentices through their apprenticeship. “I was incredibly shocked when I heard that I had won,” says Andrea. “There are so many talented people in this trade, so the fact that IAG thought I was special enough to give the award to – that’s a bit mind boggling!”

Andrea walked away with not only the title, but with a brand new industrial vacuum and sander, courtesy of Wyatt Machine Tools. Queenstown Panelbeaters co-owner, Natasha Walton, couldn’t be more proud of Andrea’s achievement. “She’s got very high expectations of herself,” she says. “So for her to know that she’s actually doing really well is fabulous.” And, she adds, “it’s great to have girls recognised in the trade.”

Natasha, who has been in the industry for 24 years, is passionate about inspiring women to give it a go. “If you don’t want a desk job and you want something active and rewarding, it’s the best thing,” she says. “You’ve got to love what you do and everything else will follow. You just have to stick it out and love the job – that’s the key.”

It’s easy to see why Andrea sees Natasha as not only an employer, but as a role model. “She’s had such an impact on me,” she says. “I’d definitely like to be in her position one day. I want to inspire other girls to join the industry, and show them that it’s a truly rewarding career.”