Held in high regard within the collision repair industry, the CRA Apprentice of the Year – Golden Hammer is awarded to the most outstanding apprentice in collision repair. The recipient of this year’s award is 25-year-old Peter Joseph. An apprentice collision repair technician at New Plymouth Car Painters Panel and Paint, Peter has a hunger to learn and a real passion for the industry, making him a stand-out contender for the award.

Now part-way through completing the New Zealand Certificate in Collision Repair (Non-structural Repair) (Level 4) through MITO, Peter is loving learning every day and taking on new challenges. “I came into this knowing nothing about the industry, so it’s really important for me to give everything a go to build my confidence. I love learning from others in the workshop.”

While he didn’t have any experience in the collision repair industry, Peter did have a passion for cars and was eager to learn. He began an apprenticeship at New Plymouth Car Painters Panel and Paint, working for his wife’s uncle. “He made it clear that just because I was family didn’t mean I’d have an easier ride than anyone else,” laughs Peter. A husband and father of two, Peter first began his time in the industry at the end of 2017. “I’d been working in hospitality for about seven years, and the hours were not good,” he says. “I could be working from 10pm to 4am – and I wanted to prioritise spending time with my family.”

When Peter found out he had been named the recipient of the Golden Hammer award, he couldn’t quite believe it. “I really didn’t expect it, I’ve never achieved anything like this,” he says. “It’s such a good motivator for me, I honestly think about it every day.” 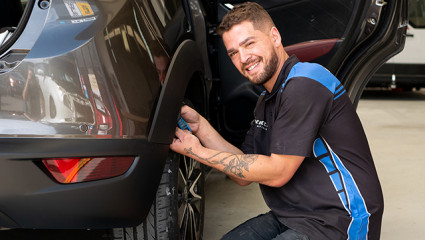 “This is such a great, rewarding industry and I’d love to be able to make people feel the same way about it that I do now."

Peter believes that the level of care he puts into his role made him stand out to the judges. “I try to put a lot of care into everything that I do,” he says. “Accidents can be traumatic and put a lot of stress on people. I want to make sure that when customers get their car back, they know it’s been well looked after.”

New Plymouth Car Painters Panel and Paint owner Andrew Purser was “ecstatic” when he found out Peter had won. “We got really lucky with Peter,” he says. “He’s a fast learner, polite, and energetic. I can’t say a bad word about him.” Andrew is particularly impressed with Peter’s eagerness to help others, and notes that he has been somewhat of a mentor to other apprentices in the workshop. “He’s always striving to improve himself and help others when he can, and he’s been like that since day one. We’re really proud of him.”

One of the best things about the collision repair industry, Peter says, is that there is always room to grow. “In hospitality I’d learned everything, and once you get to that point, unless you want to own your own business, you’re pretty much stuck.”

While Peter wasn’t interested in owning a business in the hospitality industry, he already has his sights set on owning his own collision repair workshop. “I would love to be able to take on my own apprentices and look back on my own experiences while training them,” he says. “This is such a great, rewarding industry and I’d love to be able to make people feel the same way about it that I do now.”