Aaron O’Connor has been recognised for his exceptional work within the collision repair industry after recently being named the CRA Apprentice of the Year – Golden Hammer at the Collision Repair Association’s annual conference in Melbourne. Held in high regard within the industry, the award is presented to the most outstanding apprentice in collision repair.

“I decided to apply for the award to prove to myself that I could do it and that I have what it takes to be the best,” says Aaron. “When I found I out I had made it through the first round it was amazing, but to then find out I had won, I was just over the moon! It’s an incredible feeling.”

A Collision Repair Technician at RJ Don Panelbeaters in Auckland, 26-year-old Aaron’s dedication to learning, excellent listening skills, enthusiasm for even the hardest jobs and a consistent quality of work stood out as particularly inspiring and commendable traits with the judges. 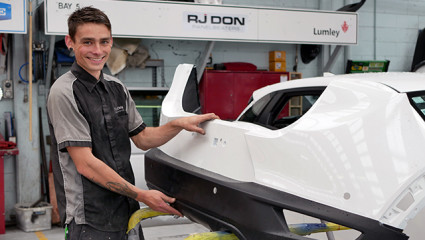 Aaron began his career in 2013 working as a groomer. From his first day, he demonstrated he was extremely capable with aspirations for a great career. Panel shop foreman, Cory Soares says, “What first struck me with Aaron was his dedication. He was working in the groom bay, but after hours he would come up to me and see if there was any welding to be done or asked questions about why things were done a certain way. You could see that he was really keen to learn with a desire to move into an apprenticeship and progress his career in the industry.”

“The thing that really attracted me to collision repair was welding,” says Aaron. “It just looked so fascinating. I love working with my hands, so being able to be creative and working with metals to make things from scratch is awesome. Doing a cut and weld, and seeing everything fit perfectly is such a good feeling. It’s almost like art.”

Aaron’s determination and high level of skill is well known, having been an IAG sponsored apprentice in 2013 and also named the 2014 IAG Apprentice of the Year. Holding the Golden Hammer award means a lot to Aaron and is another prestigious accolade in his already impressive career.

“Aaron is progressing incredibly well in his career,” says Corey, “which is shown through the many awards he’s received throughout his apprenticeship. He’s turning into a top tradesman and even teaches me a thing or two every now and then! It’s great to have him as part of the team.”

Even though he has now completed his MITO apprenticeship, and is fully qualified with a National Certificate in Automotive Body (Level 3 and 4) with strand in collision repair, Aaron believes that learning never ends in his trade. As such, he recently achieved his I-Car platinum status.

“The variety of tasks in this role means there’s so much to do and so many skills to learn,” he says. “One day, I’d love to be able to showcase my skills overseas – perhaps as part of the car scene in Japan. They have some really cool cars over there and I’d love to get my hands on some Nissan GTRs!”

Aaron’s ambition and enthusiasm also lend themselves to his hobbies at home where he is building his own 1992 Skyline R33 – complete with turbo. “It’s a labour of love,” laughs Aaron. “With plenty of labour!”