Growing up, Beau Curtis had a heavy interest in trucks, cars and all things mechanical. Not entirely satisfied in his previous job and looking for a change, he decided to take up a role as an Automotive Heavy Engineering apprentice with Truck Stops, Whangarei, to see if it was a good fit – and he hasn’t looked back.

Aim high because anything is possible!

In fact, he hasn’t even looked up. Instead, Beau’s had his head down, working hard to complete his National Certificate in Motor Industry (Automotive Heavy Engineering) (Level 3 & 4) in just two years - half the time it would usually take to complete! 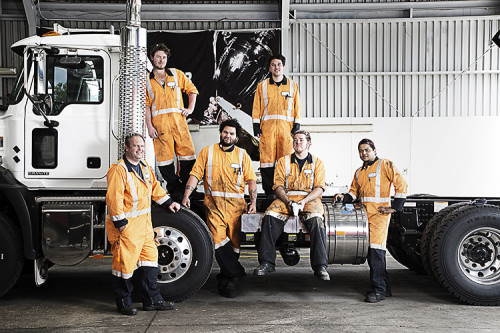 It’s a phenomenal achievement for the unassuming MITO learner and one that’s not lost on Branch Manager Steve Hawkins. “Beau is an extremely dedicated and competent individual,” says Steve. “He’s one hundred percent focused on the objectives he wants to achieve and how to achieve them and is progressing extremely well in his work. It’s really no surprise that he completed his qualification as quickly as he did.”

The motivation of purchasing a house, the birth of his son, and being down to one income as his partner became a stay at home parent, prompted Beau to complete his qualifications as soon as he was able in order to earn a higher wage. “I haven’t had any weekends for over a year,” Beau jokes. “But I’m loving what I’m doing so it doesn’t make it hard to do! And I’ve received incredible support from Truck Stops and my MITO Industry Training Advisor to help me achieve my goal.”

Having now completed his first formal qualification, Beau is aware of what it could do for his career. “I’d definitely recommend getting a qualification as it really develops your skills and greatly increases your opportunities. It could potentially take me anywhere.”

It’s the variety of the job that Beau particularly enjoys. “Fixing things that are broken along with the wide range of tasks you get to do, means every day can be different,” he says. And it’s the standard of those repairs that is so important says his manager. “I think for any business it’s vital to train and employ qualified people,” says Steve. “Especially in this industry where it keeps the repairs and maintenance of these commercial vehicles to an extremely high standard.”

Looking towards the future, Beau is keen to further his abilities with more on-the job training and has some simple advice for others who are considering progressing their careers with a qualification. “Aim high because anything is possible!”

They’re obviously words that this high-flying apprentice takes to heart.