In a last-minute decision, Jakeb Vaughan decided not to attend university. Now an apprentice panelbeater at Mark Jones Collision Repairs in Greymouth, it’s clear he made the right decision. He’s won the prestigious 2020 Collision Repair Association’s Apprentice of the Year - Golden Hammer Award, which is given to the top collision repair apprentice in New Zealand each year.

“I took a gap year after withdrawing from university to try to figure out my next move,” he says. “I was working fulltime at a hotel but started thinking about alternative career options. Then I saw a role with Mark Jones advertised with the possibility of leading into an apprenticeship, so I decided to apply and it all sort of fell into place from there.”Jakeb wasn’t always interested in cars but developed a passion for them in high school, making a career in the automotive industry a perfect fit. “I started working and modifying my own cars,” he explains. 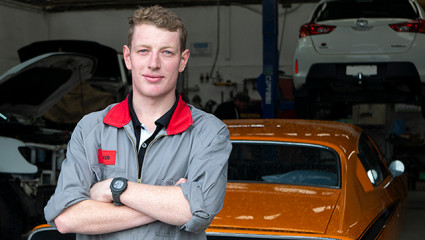 Every day is different in terms of work and I really like the challenges the job brings. My favourite part would have to be putting a big smash job back together, and after it’s all painted, sending it out the door looking like a brand-new car!

He definitely thinks his choice to start working in the collision repair sector was the right one. “I’m really enjoying it,” he says. “Every day is different in terms of work and I really like the challenges the job brings. My favourite part would have to be putting a big smash job back together, and after it’s all painted, sending it out the door looking like a brand-new car!”

Mark Jones, owner and director of Mark Jones Collision Repairs, saw potential in Jakeb from the start. “The depth of his understanding, his common sense and his ability to achieve repairs beyond apprenticeship level is impressive,” Mark says.

It was an easy decision for Mark to nominate Jakeb for the Golden Hammer Award. “He continues to show a strong commitment to his apprenticeship after two years with us and is a promising panelbeater,” Mark explains.

Jakeb couldn’t quite believe he’d received the award but is stoked to have his hard work recognised. “I wasn’t really expecting to win,” he says. “I was hoping to, but I just assumed it would go to one of the big city apprentices. I was over the moon to win it to be honest.”

Jakeb’s career is only on the up and up after his award and he has strong aspirations for the future. “Personally, I’d like to be in some sort of management position, whether that be a foreman in a workshop or possibly managing a business,” Jakeb explains. “I’m planning on doing the New Zealand Certificate in Business (First Line Management) after I’ve finished my apprenticeship.”

For those interested in the industry, Jakeb highly recommends the collision repair sector, especially in smaller towns. “On the West Coast where I’m from, collision repair is a little overlooked by students leaving school who don’t have much idea of what they want to do,” he says.