Katie Webber got her first taste of the industrial textile fabrication industry at just 16 years of age. With an interest in fashion design, a job that involved textiles was the obvious next step for the school leaver. She accepted a role with Baytex as a junior machinist and began her career.

Baytex design and manufacture large marquees and pvc structures that are used worldwide, and over the last 18 years, Katie has held a variety of positions in the company that first introduced her to the industrial textile fabrication industry.

“I began as a junior machinist working on the lining floor,” says Katie. “This was where I started to learn how the company worked and all the processes behind it.” From there, Katie took on a role on the marquee floor while she completed her apprenticeship through MITO. “After I finished my apprenticeship I left and worked as a motor trimmer to expand my skills, but I missed Baytex too much, so I was back after six months!” she laughs. 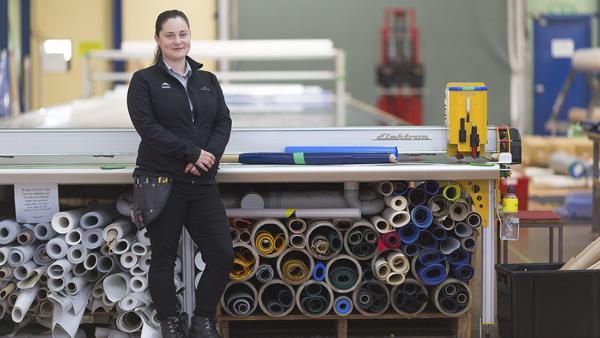 After returning to Baytex Katie took on an assistant supervisor role, and not long after that, was made supervisor of the entire marquee floor.

Now, Katie is a senior member of the company, working as the Production Manager, and oversees three different departments within the business. “There’s the marquee floor, which is responsible for all the PVC roofs, there’s the lining floor which make all the silk linings for the marquees, and then there’s the engineering shop which makes all of the aluminium frames and steel fittings.”

Katie’s job is to ensure that everything happens as it is supposed to. “I take the work orders from the sales team and filter them out to the three different departments, then I work with the supervisors to schedule the work. I’m also in charge of ordering everything we need, which involves a lot of liaising with suppliers. Then, I work on getting the dispatches through to the logistics team – I liaise with the team to ensure that we’re all on track for exporting our products around the world.”

These days, Katie’s job is less hands-on than her initial roles within the company, but she still doesn’t mind rolling up her sleeves and getting stuck into the kind of work she did when she first began at Baytex. “Just the other week we had a few really big orders to get through, so I was back on the floor, helping out with sewing and welding.”

Although she doesn’t use them every day, Katie really values the skills she has on the tools, and can see that her time spent working her way up in the company gave her a solid understanding of the business and it’s processes – something that is hugely important in a senior position.

The variety of work that Katie has been able to undertake over the last 18 years has kept her excited and passionate about the industry, and she’s quick to dispel the common misconception that it’s just sewing. “Obviously there’s an element of sewing involved but we also have high frequency welders, and a CAD plotter cutter that we use daily. Then industry-wide you can do things like measure-ups and installs, so you’re never bored!” she says.

While Katie no longer has any interest in fashion design, she’s grateful that she’s ended up where she has, and couldn’t imagine working anywhere else. “What makes it so enjoyable for me is working with such a great team,” she adds. “There’s nothing better than the enjoyment you get from completing a job, and the sense of teamwork that you feel when everybody has done their part and worked hard to get a job out – it’s really rewarding.” 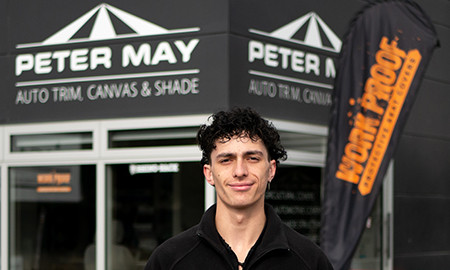