When Tom Marriott was in Year 10, he approached Peter May Limited, Ashburton, for an after-school job. Five years later and 19-year-old Tom is MITO qualified, a national award winner, and his after-school job has launched him into a successful career.

“I’ve always been a practical, hands-on kind of person,” says Tom, “so I knew I wanted to learn a trade.” Tom did odd jobs in the workshop after school and during holidays for two years, all the while getting a real taste for the industrial textile fabrication industry.

When he reached Year 12, Peter May directors Toni and Peter May could see from Tom’s work ethic that he would be a serious asset to their team as a full-time staff member, and offered him an apprenticeship, and the chance to complete a National Certificate in Canvas Fabrication (Level 3) through MITO. “At first I was a little nervous about leaving school but I knew I couldn’t pass the opportunity up, you don’t get offered an apprenticeship every day!” says Tom.

Toni always knew that Tom had the attitude and the ability to have a successful career in the industry. “From the start he proved to us that he was reliable, even when he was just sweeping floors,” she says. “Now, as a full-time staff member, Tom is a really great ambassador for the company. We really value his attention to detail, knowing that when a job leaves the workshop, everything has been done to the best of his ability.”

“When I’m working, the days and weeks just fly by, that’s how much I enjoy it. I guess it really is like people say: If you love what you do, you’ll never work a day in your life.”

“The brief for the award submission was pretty flexible but we had to use a certain amount of fabric, buckles and Velcro on whatever we made,” he says. “For me, it was a no-brainer to make a seat cover. It’s something that I do almost every day and I know I’m pretty good at it. Luckily the choice paid off!”

“I was speechless when I heard I’d won,” he says. “I was really stoked that I could achieve something like that. It was nice for me to be noticed by the industry, I’m just a guy from little old Ashburton!”

Tom is the fourth apprentice from Peter May to receive an OFPANZ Apprentice of the Year award, something which Toni is incredibly proud of. “I was absolutely thrilled for Tom, he 100% deserved that win,” she says.

Toni believes that their success rate could be down to the fact that as a small business, their staff get exposed to a variety of tools and skills, which she sees as incredibly beneficial. “Tom isn’t just using a sewing machine every day – he’s designing things on the computer, cutting things using the plotter cutter, sewing them up with an automated sewing machine or a welder, and fitting them.”

“I’ve completed my qualification and I’ve received these awards, but I know I’ve still got so much to learn,” says Tom. “For me that’s exciting and motivating, knowing my career is just getting started.” A big part of the passion Tom has for his job is due to his work environment - he can’t speak highly enough of Peter and Toni, and mentions frequently how grateful he is for the ongoing support he receives from them both.

“I know I’m not just seen as a money-making worker,” says Tom, “which is something I value. Toni and Peter’s trust in me has given me the confidence to really feel like an important part of the business, and I get great satisfaction from owning my work from start to finish and seeing that end result.”

“When I’m working, the days and weeks just fly by, that’s how much I enjoy it,” he says. “I guess it really is like people say: If you love what you do, you’ll never work a day in your life.” 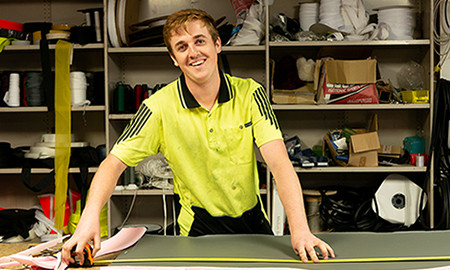