After hearing about the Outdoor Fabric Products Association of New Zealand (OFPANZ) Awards for Excellence, Logan Miller, canvas fabricator at Hawkes Bay Trim and Canvas, thought it couldn’t hurt to give it a go and enter. “I just thought I’d try my luck really – see what happens,” he says.

Entrants for the Apprentice of the Year Tier Two award had to either solve a problem or enhance an existing product in some way. Logan designed and created a tool bag with a detachable tool belt with the intention of making time on site more efficient. “I wanted to make something that had two uses,” he explains.

“It was quite a lengthy process,” Logan adds. “I didn’t really go in with a set plan or anything, just thought of it in my head and tried to get there along the way.”

Owain Jones, owner and director of Hawkes Bay Trim and Canvas, was not surprised of Logan’s OFPANZ success. As an OFPANZ award winner himself, Owain knew that Logan had what it took to snag the award and encouraged him to apply. “His entry was top class and it’s a real reflection on his willingness to learn and to get stuck in and do it. He’s put in the work and we’re really happy for him,” he says.

The variety of the industry calls for skilled workers who can adapt and work to solve specific problems that arise. “The beauty of our industry is problem solving,” Owain explains. “90% of the work we do in our workshop is unique to each customer and each situation.”When asked what it’s like to be a canvas fabricator, Logan explains that the industrial textile fabrication industry is a varied one, with no two days the same. “That’s a tough one to answer! It changes every day – one day I could be doing a seat repair and the next, something completely different.”

The OFPANZ Awards for Excellence entries reflect this with projects ranging from seats to shade sails, to tents and boat covers and everything in between.

With the industry covering such a variety of tasks, it’s no wonder that Logan’s favourite part of his role is the continual learning on-the-job. Despite working in the industry for several years already and completing a National Certificate in Canvas Fabrication (Level 3) through MITO in 2019, Logan’s knowledge of the job is still growing. “Getting paid while you’re learning is great – I’m learning new things every day still!”

A former apprentice himself, Owain explains how important it is for the future of the industrial textile fabrication industry that businesses take on apprentices. “We’re not able to mass-produce things and fly them out the door. There’s a real need to have people who are able and willing to keep the growth of our industry alive. Apprentice training for me is a high priority because we need good quality fabricators.”

Logan is certain that he’s found his lifelong career and his Apprentice of the Year acknowledgement is proof that he’s in the right place and his hard work is paying off. “I don’t really know where the win is going to take me yet, but I definitely plan to stay in the industry in the future,” he says. “Eventually, I’d like to go out on my own, start my own shop. That’s the main goal.” 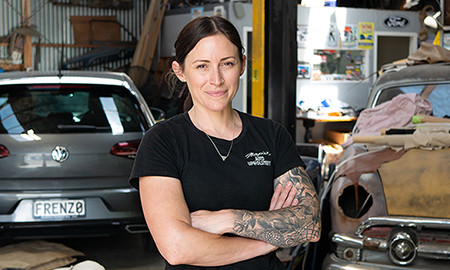 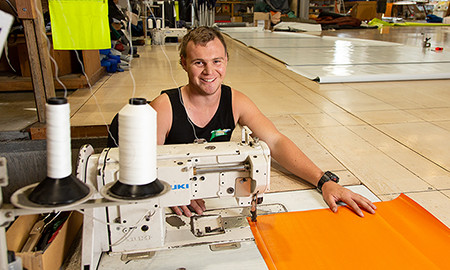 At just 20-years-old, Josh West has completed a national certificate through MITO, and was this year’s recipient of the OFPANZ Apprentice of the Year (Tier 1) award.